This Osco advertisement for Hasbro’s G.I. Joe is from the same newspaper where I found this ad for the
Robo Force, Star Wars, Roadbots, and Starriors toys last year, leaving us to ask: Why didn’t I spot this last year? Sometimes, when I am searching the newspaper archives, I zero in on an item and then move on. I can’t imagine how insane I would go if I stared at all of the pages of a single newspaper in one pass . . . 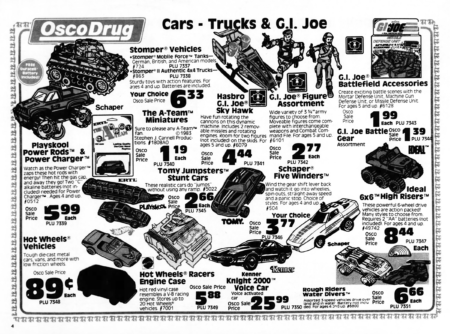 The same Throttlebots advertisement we saw earlier this year also included this block for the G.I. Joe Dreadnok Cycle, one of those toys that always did look sweet . . . but I don’t have one. I guess I just have to enjoy pics of the toy online, right? 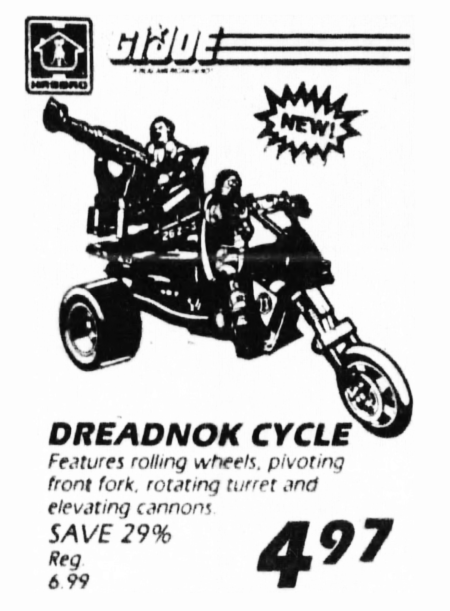 October 3, 1974. This Hobby Center newspaper ad from the Akron Beacon Journal is one of the best collections of action figures on sale in the seventies that we’ve ever uncovered. It’s not enough that the ad offers us a great look at Hasbro’s G.I. Joe and Mattel’s Big Jim, two of the greatest action figure lines of the mid-seventies, but we also get such classics as Gabriel’s Lone Ranger, Ideal’s Evel Knievel, and even Kenner’s short-lived Steve Scout Boy Scouts action figure! What kid in 1974 wouldn’t want all of these? 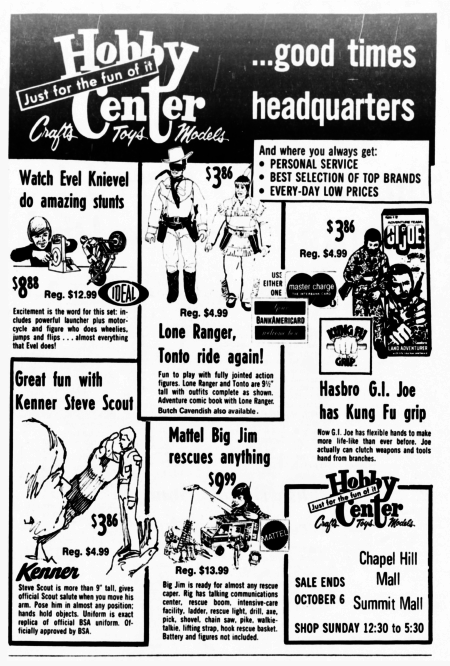 December 17, 1986. This Des Moines Register block of advertising brings three of my favorite toylines of the eighties into the picture, as Hasbro’s G.I. Joe and Transformers join Kenner’s M.A.S.K. to make for a Christmas treat that I’d enjoy as much today as I would have when the ad was new.

November 18, 1984. Alongside yesterday’s Jetfire and Shockwave ad block we find this offer for the G.I. Joe Zartan action figure at Sears, with the toy a buck off for that promotion. The classic Zartan character design looks as incredible today as it did way back in the eighties, and I can happily report that I don’t need to take advantage of this ad; I’ve already got Zartan in my toy collection!

That Autobot minicar ad we saw a few days ago also included this block for Hasbro’s G.I. Joe action figures and vehicles, showcasing the little-often-seen Battlefield Accessories and Battle Stations, both of which you can explore in detail at the yojoe.com website. These were inexpensive and fun G.I. Joe accessories and seeing this ad leaves me asking: Will we ever see anything like this for action figures again, or is the style of play that supported these types of toys over forever? 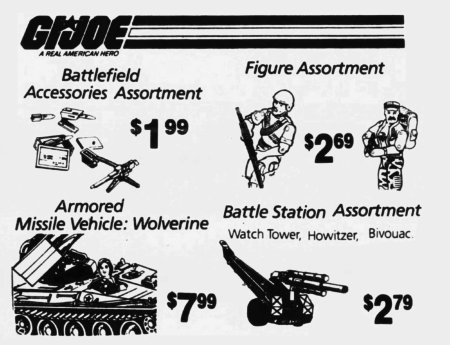 December 8, 1985. That Honolulu Star Bulletin newspaper archive is one hell of a find! So many awesome toy advertisements from the eighties are hiding in those digital archives that it feels like I’ll never uncover everything. Fortunately, that means we get the fun of the G.I. Joe bridgelayer, Rattler, and even the Dragonfly helicopter. Hey, I actually have all three of these! I am lucky!!! 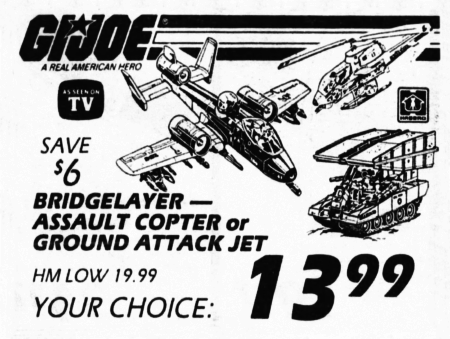 Yesterday’s Fireball Island advertisement also included the below block for four of Hasbro’s G.I. Joe vehicles, only one of which — Sgt. Slaughter’s Triple T — I had as a kid. Hasbro really did construct some of the greatest toys of the eighties, and I look back at these G.I. Joe toys and marvel at how the toys required so much assembly; many of them were part model kit, weren’t they? 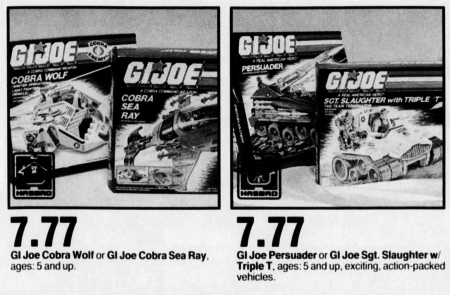