This advertisement comes from Games Master International, a UK gaming magazine that I stumbled across last year and grabbed when I had the chance. Featuring Milton Bradley’s Axis & Allies* boardgame, the ad stands out because it most makes me think of the games not shown in the ad: Conquest of the Empire* and Fortress America*. I loved those two and played them a lot more often than I did Axis & Allies. Still, nifty ad! 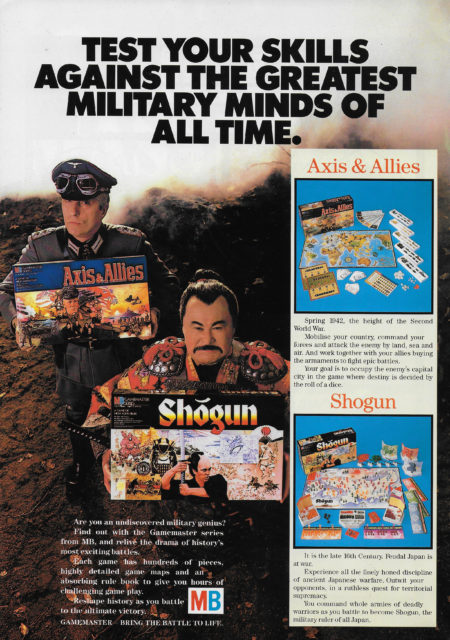 This two-sided flyer comes from the 1990 BattleTech: The Crescent Hawk’s Revenge computer game and shows how Fasa took advantage of the computer game platform to promote the BattleTech novels. They also promoted the boardgame products in the computer game (see this other flyer that was packed in the box), but the splashier of the two ad inserts is all about the novels, which strikes me as a smart move. 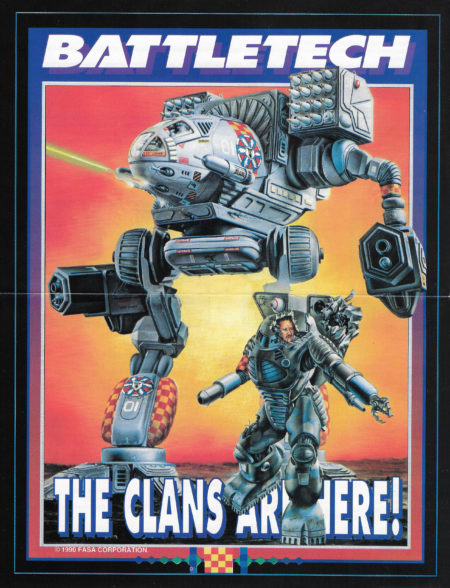 Billed as the “official Robotech fanzine,” Protoculture Addicts was an anime magazine that ran from 1987 through 2005, though the format and focused changed throughout the magazine’s life. In its early years, Protoculture Addicts was the earliest works of the company that would go on to publish the Mecha Press magazine and then create the Heavy Gear game, and it is that connection to gaming that brings us this peek at a 1990 issue of the magazine. 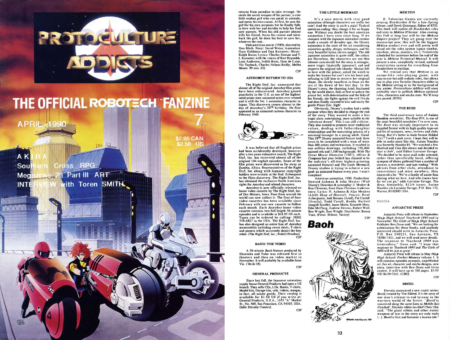 Above, notice the brief news article about R. Talsorian’s Mekton roleplaying game (find at Amazon.com*). The news reports on the upcoming publication of a new Roadstriker book (check out the first edition cover art) as well as an overview of what the game was all about. It’s fun seeing a promise of what the creators of the Mekton Jovian Chronicles books were thinking early in their publishing life; the magazine’s Mecha Press sister would go on to publish several Mekton articles just a few years after this issue of Protoculture Addicts was released.

This R. Talsorian advertisement from an issue of White Wolf magazine should be all you need to smile on this November Saturday. The ad block promotes two of the company’s top roleplaying games of the eighties — Cyberpunk* and Mekton* — and even though the design is fairly simple, the memories the ad sparks are totally worth the time it took to share this with you. Enjoy the ad, gang! 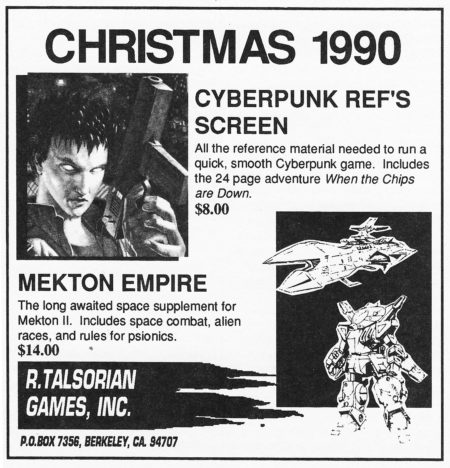 This B&W ad for the BattleTechnology magazine (find at Amazon.com*) comes from the second issue of Far & Away, a sci-fi roleplaying/boardgaming magazine from the nineties that lasted — as near as I can determine — only two issues. Published by Pacific Rim, the same company that produced BattleTechnology, the magazine covered Shadowrun, BattleTech, Traveller: 2300, Robotech, Star Trek, and a handful of other sci-fi RPGs of the time.

This advertisement isn’t nearly as exciting as some others, but it was still enough to spark my imagination back when I was a kid and playing BattleTech with my friends.

This single-page mail order form was found inside a copy of BattleTech: The Crescent Hawk’s Revenge, the 1990 BattleTech computer game by Westwood Associates and Infocom. I played the hell out of this game (more the original, The Crescent Hawk’s Inception, than this exact release) back when it was new, so getting a chance to purchase both games and get my hands on the documents and promotional materials inside was too good a chance to miss. 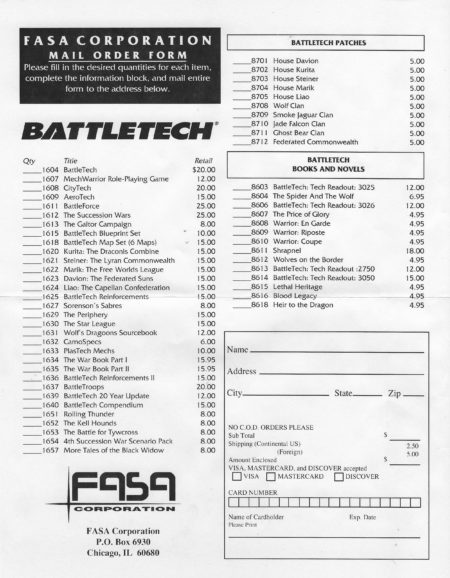 What I find most impressive about this single-page form has to be the number of BattleTech products available in 1990. First published in 1984 (under the BattleDroids name), this order form shows the game when it was only five to six years old, demonstrating just how much work Fasa was sinking into rapidly expanding the game and setting. Just look at all of those BattleTech novels that were already available when this game was published!

As work continues on my new G.I. Joe book (project update here), I find myself dividing reference material into two different “use this” and “do not use this” stacks. I’m focusing on the eighties with this book, so that means that a few fun items get dropped and forgotten. But, let’s not completely ignore the “do not use this” stack of stuff, right?

This is the last cover from inside the Buck Rogers XXVc* roleplaying game’s box set and, in my opinion, the weakest of the three booklet covers. I guess one of the paintings from the core game had to be the weakest of the group, but it is still a little disappointing after so many excellent Jerry Bingham covers from the game. 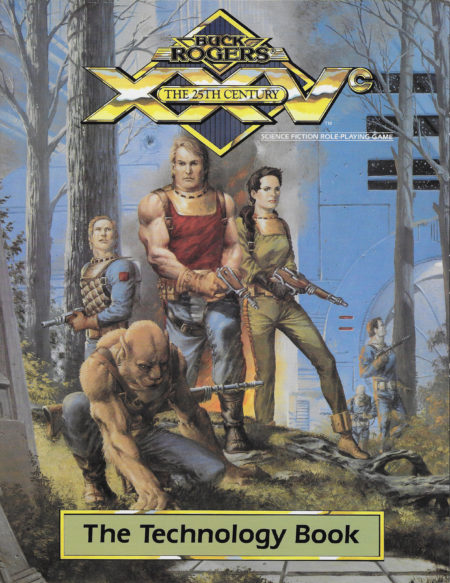