If you dig deep enough you can run across strange things, like this newspaper ad for Star Wars action figures and the Land of the Jawas playset. From the November 5, 1979 issue of Owosso Michigan’s Argus-Press, this advertisement gives us another peek at how the world saw the Kenner Star Wars action figures of the seventies: as little B&W illustrations in a newspaper ad!

On the left is a close shot of the Star Wars part of the ad while the right shares the full newspaper ad for Tradeway’s “Toyland.”

Someone may have to remove my access to the Google newspaper archives. As I suspected, it’s not all that tough to find more fun ads from the past and as I proof I offer this December 1, 1983 ad from the Milwaukee Sentinel. On the left is the full page ad showing everything while the right is an expanded view of the Star Wars toys on display . . . including the AST-5 Mini-Rig toy!

Last week I posted a newspaper ad from 1982 that was promoting Kenner’s Star Wars Mini-Rigs. Locating that ad soon had me running more searches through Google’s newspaper archives, and it took no time at all to uncover this ad from the August 19, 1982 Evening Independent out of St. Petersburg, Florida.

More Mini-Rigs, yes, but this time we also get to see the Micro Collection toys, action figures on sale for $2.18/each, and even a cash rebate offer from Kenner. How many more awesome ads are hiding in those newspaper archives? 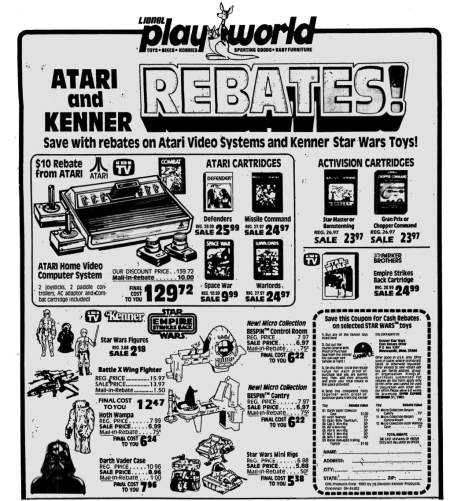 From the October 27, 1982 issue of Spokane, WA’s Spokesman Review comes this fantastic ad for Kenner’s Star Wars Mini-Rigs. Just $6.99/each, the ad shows the MLC-3, MTV-7, and PDT-8 toys. Now I’ve made no secret of my love for Kenner’s old Mini-Rigs, so I am certain you know just how excited I was to run across this ad. I’m gonna have to save this for when I return to work on my Mini-Rigs book . . . 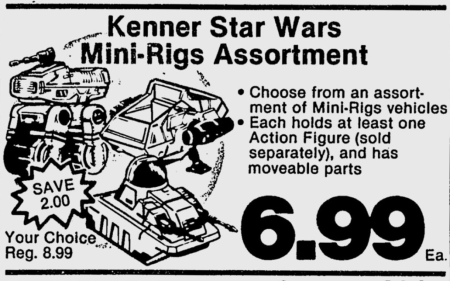 Earlier this month I posted an old AP article about Transformers toys and mentioned how there are more newspaper articles online. Well, here’s one that’s fun to look back on and smile. This December 12, 1990 AP article announces that Hasbro’s Transformers toys — after earning $950 million over seven years — was under review and could be cancelled due to declining sales.

The brand (as we all know) eventually bounced back, but seeing this article is a lot of fun because it helps show how the toy industry goes through cycles where brands rise and fall in popularity and demand. After all, don’t forget that in 1990 you couldn’t buy Star Wars action figures for Christmas; for that you had to wait five more years . . . 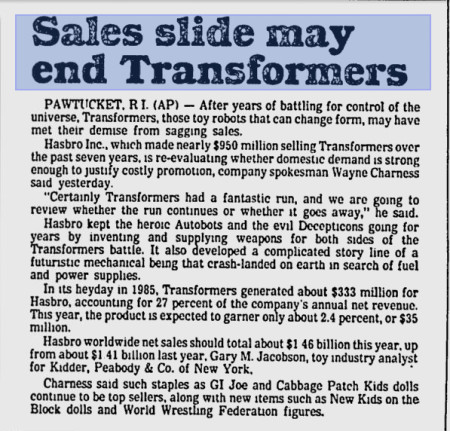 I mentioned yesterday that I had collected together nine newspaper articles about Transformers, and one theme that kept surfacing as I was working on Each Sold Separately and Action Figures Not Included makes another appearance, this time in a November 30, 1985 article in the Pittsburgh Post-Gazette.

“Transformers and Gobots are the latest beneficiaries of an ongoing trend: Phenomenal toy sales stem in large part from the animated kiddie TV shows which star the very toys themselves. Critics call these shows “program-length commercials,” and it’s tough to refute that label.”

Incredible. I find it kinda shocking that things have changed so much when it comes to entertainment and product merchandising. But in 1985 the FCC rulings of 1983 and 1984 were still fairly new, so I shouldn’t be surprised at all that some of the older generation were opposed to the marketing value of cartoons about toys. The more successful toys/brands at the time had actual stories and characters in the cartoons, though, and it shouldn’t make my brain wince whenever I find these older articles that seem to fixate on the evils of marketing to children.

It’s a good thing the world got a bit more progressive over the last three decades. 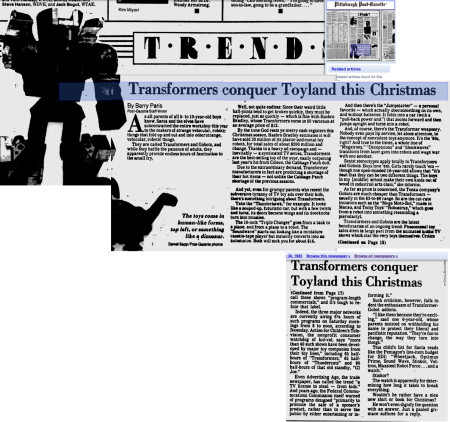 One of the awesome things on the internet is Google’s newspaper archives. With work you can search through newspapers going back decades, and when you’re like me that means you’ll eventually find yourself tracking down newspaper articles about toys.

I’ve managed to collect nine different articles — ranging from 1984 to 2007 — that look quite valuable for anyone researching Hasbro’s Transformers brand. Lots of great info in those, including this quote from October 14, 1987 (about GoBots and Transformers):

“It’s not clear which company’s line of robot action figures will be most successful at capturing kid’s hearts in this latest extension of the toy wars.”

Since several of the articles are AP works there’s a lot of overlap, but after spending time comparing articles I feel pretty confident the nine I’ve collected together (each different from the others) are some of the best historical pieces.

Man, there are days that I wish I had time to do nothing but read through old newspapers. 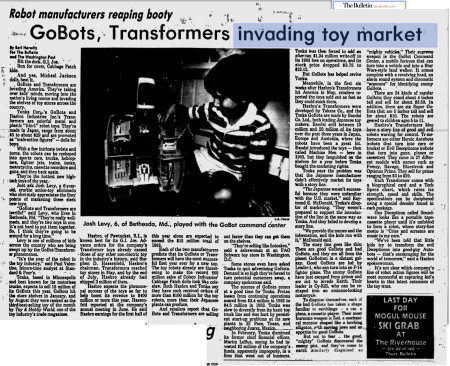 Not major news or exciting toy info, but battlegrip.com found its way onto the Guardian’s Internet Picks of the Week. Kinda cool in a weird way. Hello, Guardian readers. Hope you’re not as confused as I am right now.

Update: And the site was even in the printed newspaper, as this photo shows. Very unusual and fun stuff! 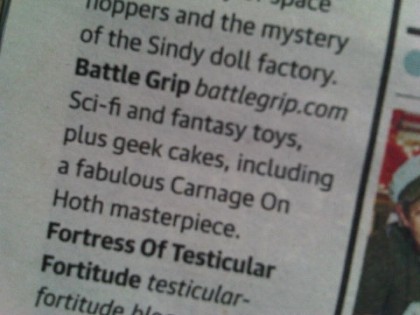