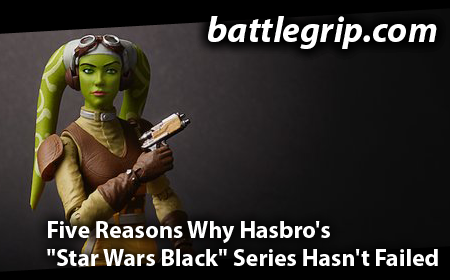 Way back in 2013, when Hasbro’s 6-inch scale Star Wars Black series* was first announced, I took a fairly unpopular stance on the line’s potential, posting Five Reasons Why Hasbro’s “Star Wars Black” Will Fail to the site and drawing some heat. Well, it turns out that my old post has been making the rounds and it is time to revisit the subject.

Thank you to everyone who contacted me to let me know about the discussion in a Facebook group.

NOTE: As with the previous post, I am only referring to the 6-inch scale Star Wars Black series in this article. The 3.75-inch “Black” series is a different beast altogether.

ADDITIONAL NOTE: Thank you to the It’s All True guide to Star Wars Black. The collection of info on the series hosted there was an invaluable resource while assembling this article.

Since 2013, four years ago, we have seen two new Star Wars films reach theaters. That’s a faster rate of release than the franchise has ever enjoyed, and the success of those two films helped spike product sales and demand for Star Wars. As Forbes reported in 2015:

“Analysts predict Star Wars merch will generate some $3 billion in sales in 2015, and $5 billion over the next 12 months.”

And as the 2015 Hasbro annual report tells us:

“In recent years our sales of products under the MARVEL and STAR WARS licenses have been highly significant to our business.”

This makes perfect sense, as Disney is putting a lot into promoting both of those brands and releasing a stream of new films. By the end of this year we will have seen three new Star Wars films in three years, whereas back when Star Wars was new we only saw a single film in the same span of time. But why does Hasbro call out the Star Wars license under a section titled “Risk Factors?” Because the Star Wars license has become so important to their business that they need to get as many dollars out of the brand as possible. The report states:

“If we fail to meet our contractual commitments and/or any of these licenses were to terminate and not be renewed, or the popularity of any of these licensed properties was to significantly decline, our business would be damaged and we would need to successfully develop and market other products to replace the products previously offered under license.”

This means that Hasbro must keep new Star Wars product on shelves, tapping into as many different market segments as possible. And that means that the Star Wars Black series*, regardless of sales volume or markdowns, is an important cog in a much larger machine. By producing new Star Wars Black product each year, Hasbro can both make the adult collectors happy and contribute these toys to a steady stream of product that appeals to buyers that they may have otherwise lost to other toymakers.

In the 2013 article, I mentioned “limited playability” as one of the five reasons I expected that the Star Wars Black series* would fail. One thing about playability is that it assumes kids are playing with the toys, but what is actually happening — as near as I can tell by watching the web and the few instances I’ve seen someone buying the toys at retail — is that these are going to collectors for display purposes. Playability is not an issue at all with this line since few people play with these toys.

And I even wrote of vehicles in that old article, stating that ” . . . I cannot see Hasbro producing an X-Wing toy spaceship for less than $175 or $200.” Well, we may not have seen an X-Wing at this scale, but there was a TIE Fighter released in 2016. Unfortunately, sales weren’t as strong as Hasbro would have liked, and there for a time the toy was down as low as about $80. I know because we bought one at Amazon.com when the price dropped low enough, and we even managed to solve the display question I raised in that older article.

I had worried that Hasbro would oversaturate the market with these figures, and with close to 100 toys released in the Star Wars Black series* that would have been an issue if the toys were easily available. What has happened, though, is that some areas seem to get too few figures while others are overrun with 6-inch scale Star Wars Black action figures. For example, take a look at these pics that I snapped yesterday in a New Mexico Walmart. Look at all of the toys!!!

That’s close to 30 Star Wars Black series* action figures at a single Walmart, including several that I’ve not encountered at the Target or Walmart stores near my house. It’s that uneven distribution which is feeding the collector mentality; where some regions are unable to get a figure another area is buried in that figure. This means those practicing Amazon arbitrage who have easy access to a figure can flip the toy for a reasonable profit, keeping the collectors happy and the stores happy. We had seen some issues with oversupply earlier — see this 2014 post — but it seems like Hasbro has mostly solved their supply problems and I rarely see shelves buried in Star Wars Black peg warmers these days.

This is exactly the opposite of my #4 reason for failure in the 2013 post, but it appears that “Difficult to Find” has, instead of killing the line, driven collector demand for some figures. Checking eBay shows over 9,000 “Star Wars Black 6″ figure” auctions at this exact moment, and collector demand has driven prices up higher than expected. I greatly underestimated the desire of collectors to display these toys in large groups.

Where I saw the $20 price tag as possibly damaging to the Star Wars Black series* in my 2013 post, it now appears that the price is technically low when compared to similar Star Wars offerings. The Figuarts Star Wars figures* make the Black series look cheap by comparison, which can only be a positive thing for the line’s sales.

Additionally, the increased cost in highly-poseable 3.75-inch Star Wars action figures makes the $20 price tag on the Star Wars Black series* look reasonable. Hasbro stepping up the number of 5POA Star Wars figures and moving the poseable 3.75-inch figures higher prices has only helped the 6-inch figures. No complaints here, however, because I happen to enjoy the more Kenner-like 5POA toys. 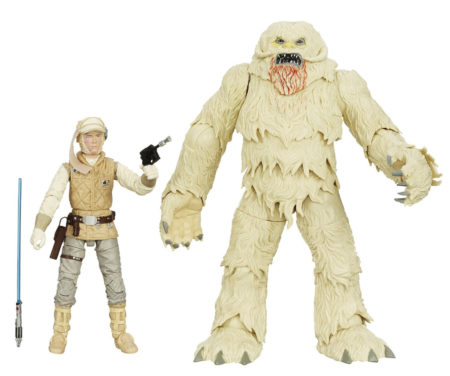 “With any real luck I am very wrong and the issues I have outlined won’t cripple and destroy the 6-inch scale Star Wars “Black” action figure series. In a perfect world Hasbro resists temptation to increase production runs to the point that they oversaturate the market, but I think that perfect world also requires Star Wars fans of my own age to love the new movies.”

Well, maybe this is a perfect world because I enjoyed The Force Awakens and rank Rogue One in my Top 3 Star Wars films ever. I was very wrong, and I am happy that I was wrong. Disney has done a better deal with Star Wars than I expected, and other than some oversupply issues early in the line’s life, Hasbro has done a great job of moderating supply of the Star Wars Black series* toys.

And this is great news. Between the line’s continuing sales at mass retail and Hasbro’s willingness to take a chance on larger items — such as the Wampa* and Jabba* — I am left hoping that we may get lucky and see a Landspeeder scaled for this line. Just imagine the fun of a boxed set that includes Luke, Kenobi, the droids, and a Landspeeder! Yes, I am glad that it turns out that I was wrong and the Star Wars Black series* has proven to have legs.