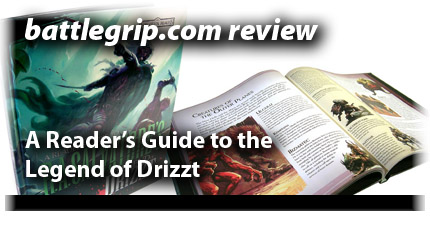 NOTE: This is another older review that I have transferred to battlegrip.com in order to be sure it isn’t lost. All of the Amazon links in the review are affiliate links and buying anything through those links might earn me enough to hit an arcade for four minutes.

Game fiction, as you know, is often ridiculed and spoken of as pure garbage, treated as a lesser form of fiction that is unworthy of respect. This is true at times, but then all categories and genres of fiction include inferior works that should have never been published. It’s the way of life. To my mind, most game fiction isn’t garbage but, rather, simply popcorn entertainment. I do not pick up game fiction to be awed by a literary masterpiece. I pick up game fiction to read an entertaining story set in a world that interests me.

Twenty years ago, in the early mornings and late afternoons as I rode the bus to and from school, I was entertained by R.A. Salvatore’s The Crystal Shard. The second Forgotten Realms book that I read (and superior in my young mind to the previous book in the series that I had just read the week before, Darkwalker on Moonshae), The Crystal Shard was a literary masterpiece that excited my imagination. Little did I know – did any of us know – that the book was the launching point for a fictional character who would come to represent all that is both good and bad, awesome and overdone, with the drow race of the Dungeons & Dragons empire.

At the time, I didn’t expect to see any more from the characters in the book. I fully expected to see more Forgotten Realms novels, but my inexperience with the world of publishing left me completely astounded when another book, Streams of Silver, and then a third, The Halfling’s Gem, hit my hands. By the time Homeland reached shelves I was less surprised and had grown to expect more books featuring Wulfgar, Bruenor Battlehammer, Regis . . . oh yeah, and Drizzt Do’Urden.

I have to admit that the last book in the series that I have read was Sojourn, so I completely understand that my experience with the character is horribly out-of-date. Still, despite not having read the other books in the series I couldn’t resist grabbing the large, attractive A Reader’s Guide to R.A. Salvatore’s The Legend of Drizzt (that’s a hell of a mouthful). A 168-page full color hardcover, over ten inches wide and twelve inches tall, this book is as close to popcorn entertainment as you can get when it comes to game books.

A Reader’s Guide to R.A. Salvatore’s The Legend of Drizzt is broken into five main sections plus a foreword (by R.A. Salvatore) and an afterword (by the book’s author, Philip Athans). I actually feel a little sorry for Athans, who tackled a large and difficult project, because while Salvatore’s name is plastered across the book’s cover (hell, it’s even part of the damn title), Athans’ name is nowhere to be found on the cover. Athans was given a massive assignment and I’ll be surprised if most readers, when asked, actually know his name. Philip Athans, you deserved to be mentioned on the book’s cover.

So what are the five main sections of the book?

Tales of the Legend of Drizzt. Thirteen titles, from Homeland to Sea of Swords, are each summarized on a two-page spread that features a block of text, a large image of the book’s current cover art (the art for older editions of each title is spread throughout the book for both decorative and illustrative purposes), and a few short paragraphs that are keyed to images found in the artwork. (The Crystal Shard summary section, for example, identifies Cryshal-Tirith and Verbeegs in the artwork.) While functional, and perfectly adequate summaries, I suspect that most fans of the series will skim this section of the book. There’s nothing particularly exciting to be found here, though the section is attractive and I enjoyed reading all of the summaries, even those for the books that I’ve already read.

People of the Legend of Drizzt. Covering the characters of the series, this section of the book gives two-pages to each of the main characters (Drizzt, obviously, is given four pages) and then is broken down into subsections that cover lesser characters. For the main characters of the series, the descriptions include information on important magic items, and as can be expected for a book of this size every character is illustrated. The subsections were actually a more interesting read for me, if only because reading about the minor characters helped me become better acquainted with the stories in the series that I haven’t read. The information covering minor characters is also the single largest section of the book, covering pages 56 through 117. The section on Great Wyrms was particularly fun, if only because it’s always fun to read about dragons. Please don’t expect too much from this section of the book, though, because every entry is light on detail and sticks to the popcorn entertainment feel that I’ve already mentioned.

Realms of the Legend of Drizzt. Illustrated with maps of the Forgotten Realms (most of which I recognize from the 3rd edition campaign setting), this section of the book was the least entertaining. If you are already familiar with the information found in the various editions of the Forgotten Realms setting (though I’m not sure if the new Forgotten Realms Campaign Guide includes much setting information, because I haven’t read the book) then this section will likely be as forgettable for you as it was for me. This isn’t to say that it’s a waste of space, just that this section included very few maps and descriptions that I did more than glance at (Icingdeath’s Lair, for example, captured a few moments of my attention whereas Waterdeep, which I’ve already read entire books about, was largely ignored).

Monsters of the Legend of Drizzt. This section covers everything from dire corbies to displacer beasts, plus a lot of creatures that don’t fall in the same section of the Monster Manual, and is little more than summaries and artwork that we’ve seen before. All that places this above the previous section – in my eyes – is that fact that reading about monsters is more fun than reading about locations. I did read every word of this section, but the entire time I was reading all I could think of was how A Practical Guide to Monsters did a better job of taking the known catalog of Dungeons & Dragons monsters and presenting them in a new light.

A Deep Drow Lexicon. The final section of the book, and only two pages at that, this is exactly what it sounds like. This section could prove useful for DMs who are working on adventures set in the Underdark, but it’s more of an after thought than a full section of the book.

What do I think of the book?

I’m a bit torn. On the one hand, A Reader’s Guide to R.A. Salvatore’s The Legend of Drizzt is a complete waste of paper and money. There’s nothing really new here, and, while professionally presented, the book is little more than a reference that summarizes existing material. On the other hand, though, it is entertaining at times and, as I said, an attractive book. I think I’ll continue to be torn and the best I can offer to anyone who is also torn is to say that you should buy this book if you are a fan and collector of the Forgotten Realms. If you have only a passing interest in the Forgotten Realms, consider adding this book to a wishlist and maybe someone will buy you a copy for your birthday or as a holiday gift.

I do not regret the purchase, since I was entertained and can see myself taking this off of the shelf from time to time, but I would not purchase this book again if I was given a second chance.