There is little more frustrating to me than sitting down to write a review of an action figure that is absolutely beautiful — a masterful sculpt and fantastic paint apps — when I know I’ll be closing with “I cannot recommend this toy,” but that’s exactly what is happening today with this Alice: Madness Returns Card Guard* action figure. It almost didn’t turn out that way, but a solid 24 hours of experience with the toy makes this a review I dread sharing with you. 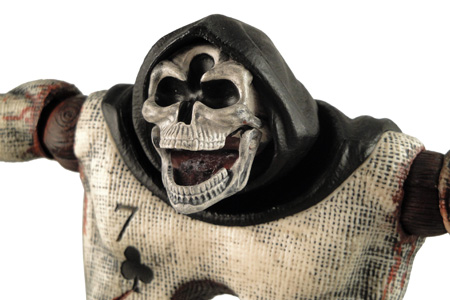 Abso-freaking-lutely 100% agree with this! But I would take it a step further and state that regardless of the pose you use the Alice: Madness Returns Card Guard* action figure is going to fall over. Even with the stand this 8-inch tall action figure toppled over three times in the first 24 hours, and since that first day I’ve stood him once more . . . just to come back later and find him on his back. The character design is awesome, but without metal or something in those feet he’s just not able to stand. 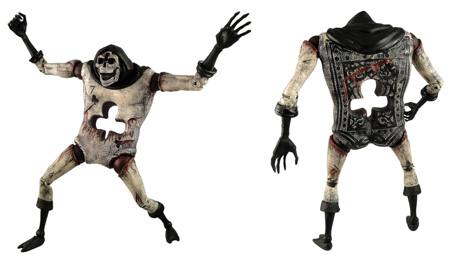 And that sucks, because even despite the toy’s other problem — the lack of a weapon of any sort — it’s an amazing work. But the quality of every single aspect of an action figure is effectively worthless if the toy is simply going to fall over each and every time that I stand it up for display. It doesn’t fall over instantly, but within two or three hours the weight of the top is going to overcome the support and the toy will fall. Usually with the stand still attached; the toy bends at the foot joint so that stand is still almost flat with the shelf or table while the rest of the figure lays there. 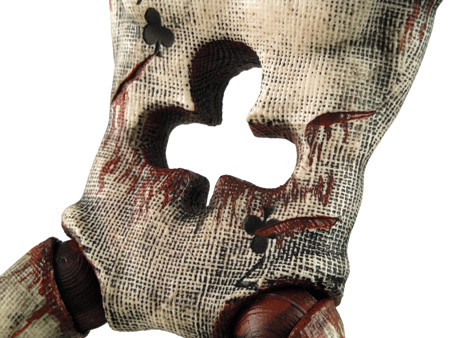 Take a close look at the above photo — go ahead, click it, enlarge it, study the details — and you’ll find that the linen finish effect of the playing card is actually sculpted into the figure and not simply a paint effect. And every gash and tear in the card, the club icons and “7” numbers, and the wood grain-like patterns in the hip and shoulder ball-hinge joints are all sculpted details that prove the artist behind this toy did far more than phone in the design. This truly is a remarkable sculpt and the artist should be given way, way more work and opportunities to create action figure sculpts. 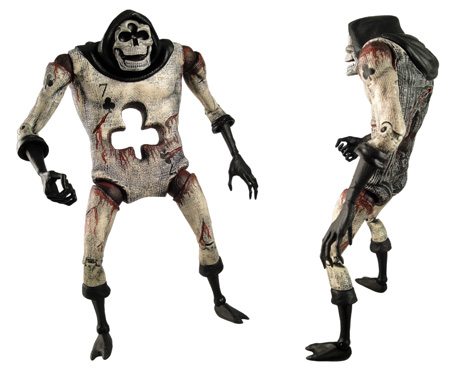 And I focus on those little details like the linen finish because just looking at the rest of the toy — especially that skull-faced design of the head — shows how fabulous a sculpting job we’re looking at. It helps that the Card Guard character design is scary as hell and amazing, but to translate the artwork (see this superpunch.net post) into a three-dimensional form is an impressive act . . . and it kills me that I cannot recommend this toy to you. 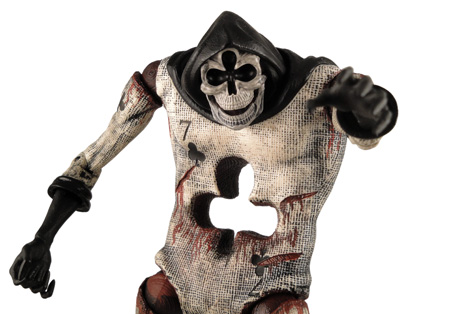 Diamond Select Toys didn’t stop with an amazing sculpt for their Alice: Madness Returns Card Guard* action figure; the paint applications are a perfect fit with the sculpt and enhance the design, with a dark wash bringing out the sculpted details of the linen finish and all of the gashes and tears in the design highlighted with “blood” effects. And the paintwork on that skull is just as perfect as the sculpt beneath. 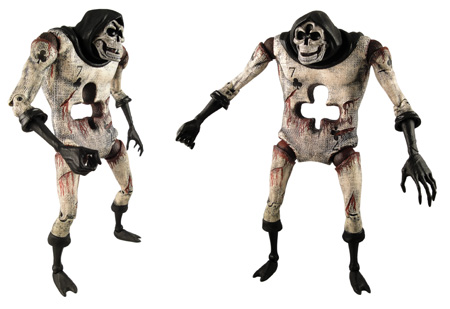 The review at Flameboy Figure Reviews says of the action figure’s paintwork:

It is hard to describe some of the small touches that make this figure really capture the deteriorated and tattered remains of the Card Guard. Hopefully the pictures below show it more clearly. It really does seem like nothing has been overlooked.

Agreed. Diamond Select Toys did everything right when it comes to the Alice: Madness Returns Card Guard* action figure’s paint and sculpt. 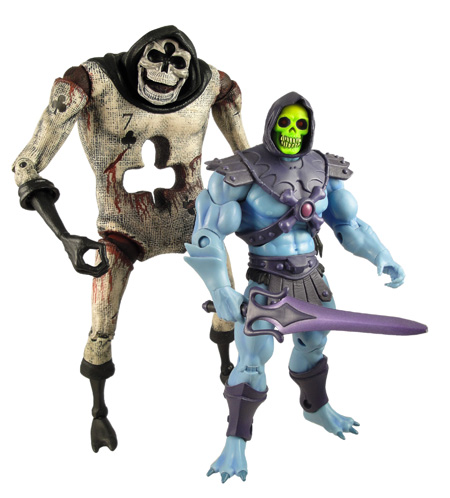 Articulation: Better Than I Expected

Both of the Card Guard reviews I have already linked to — Mint Condition Customs, Flameboy Figure Reviews — go out of their way to detail the articulation of the toy so I won’t bother with a point-by-point breakdown. Check both of those reviews.

What I will say, though, is that Alice: Madness Returns Card Guard* action figure is loaded with way more articulation than I usually expect from Diamond Select Toys and the poses you can get the figure into are more plentiful and exciting than I was expecting. The below shot with Batman used an action figure stand, but the toy held the pose nicely long enough for me to get the shot . . . and that was with the weight of the Batman action figure leaning into the Card Guard. 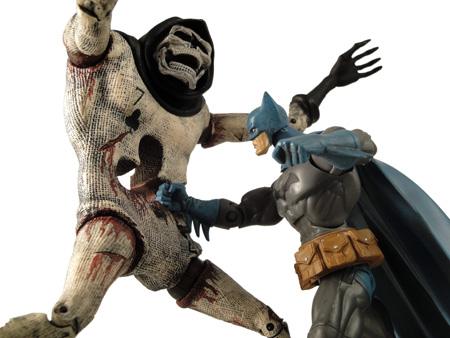 Diamond Select Toys’ Alice: Madness Returns Card Guard* action figure looks to be a perfect toy. Amazing sculpt and paintwork and plenty of articulation to get some truly dynamic poses should be a perfect fit with a character design this spookily awesome, but the toy’s inability to stand on its own for more than a few hours immediately makes me suggest that you not buy this.

After all, does anyone really need a toy for their display that’s only going to keep falling and may even fall and break? There’s way better ways for you to spend $20 or $25 than on a self-shattering toy.