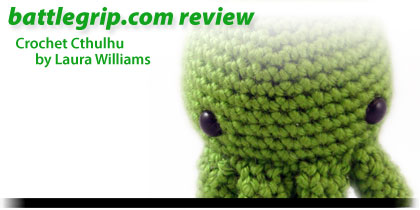 Austin recently hosted several independent and web comic creators at the annual Staple! event. I was lucky enough to attend the event (thanks, Paul, for the tickets!) where I wandered the two halls and poked around at comics, original artwork, and — yes, even there — toys.

One of the more interesting ways of selling toys was an artist with little bags of assorted toys. Each bag was priced at $1 and included a header card that was a comic strip in which the artist tries to figure out how to clear out his toy collection. Most of these were junk plastic pieces, toy cars, and assorted small stuff so I passed on the bags. Looking back I’m kicking myself; I should have bought one of these.

Anyway, I’d better get on with it.

Gina and I walked from table to table, passing by most of the items until we ran across an artist selling not only comics but also the cutest little Crochet Cthulhus. Laura Williams — check out her www.yumyumthebunny.com website — had a selection of multi-colored Cthulhus available for $10 each and Gina didn’t even hesitate as she grabbed one.

Quite short — maybe 5″ or so — these Crochet Cthulhus are cute and cuddly, exactly what we’ve grown to expect from the Great Old One over the last decade or so. What is it about Cthulhu that causes people to create cutesy versions of him? I swear there are more cute Cthulhus than there are terrifying Cthulhus.

Crochet Cthulhu’s obviously a DIY toy, a hand-made creation crafted out of love and a sense of “I’ll do it my own damned self” that we’re seeing more and more of these days. He’s well made, cute, and no doubt right now confusing Gina’s co-workers (she took the toy to the office).

If you’ve got the skills and time, and feel motivated, you can make your own Crochet Cthulhu using this pattern. It’s not an exact match for the Crochet Cthulhu shown here, but it’s still cute and should fit right in with your favorite plush toys.

I have none. I mean, what is there to say about a Crochet Cthulhu besides he’s cute and you could make your own if you wanted to? I guess I could direct you to the Cthulhu Crochet and Cousins blog if I really wanted to. Nah, we won’t do that. You wouldn’t be interested. Instead I’ll point you at the Dread Crocheted Cthulhu.

Philip Reed has a little experience with cute Cthulhu toys. Steve Jackson Games’ Chibithulhu toy was one of his office projects last year and, even today, takes a little time as future plans take shape.