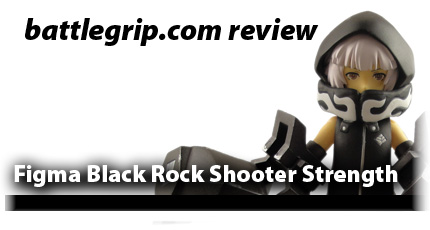 A Little Girl with Robot Arms

And not just any robot arms, as you can see in the photos. The Figma Strength* action figure comes with four arms — two standard human arms and two massive robot arms — but why anyone would even display the toy with anything but the robot arms is a mystery to me. Though I guess I should really be a responsible reviewer and show both types of arms, so let’s get those pesky human arms out of the way so that we can get to the good stuff.

The two human arms separate from the body just below the shoulder joint by pulling the arms off of the hinge/swivel joint to reveal a post that the robot arms plug into. The “Figma” joint isn’t exactly like a Revoltech joint, but it’s similar in that it’s a hinged ball with a post on each end. I think the Revoltech joint is technically the better joint, but the poseability of Strength* leaves me perfectly happy with the quality of the joints. Unlike Revoltech joints, though, these don’t appear to be removable. At least not without possibly damaging the toy, and at over $50 I’m not about to try anything that could break a joint.

The two human arms look perfectly fine, but to be honest if I had seen Strength* as she looks in the above photos I never would have ordered her. I mean, with the human arms in place she’s basically just any other anime girl with a tail. There’s nothing horrible about that, but there’s also nothing that attracts my attention.

In addition to the two sets of arms, Strength* comes with a second face, a total of four pairs of human hands, and a stand. Looking at each of the accessories I have to say that only the stand is useful to me; the two faces are too similar to really matter and the human hands are unlikely to ever make it onto the toy.

Swapping the faces is fairly easy. Just pop off the head and remove it from the hood and scarf (by the way, I love the look of the hood and scarf) and then remove the front of the hair and then remove the face. It all holds together well and looks good, but for the extra face to have really mattered to me it needed to be drastically different from the face that the toy comes packaged with.

The extra face and all of the human hands are not the reason to want this toy.

These are what drew me to Strength* and the arms are not at all a disappointment. Each arm is almost as tall as Strength and they snap onto the body without any problems at all. And with each finger articulated in three points — and the thumbs connected to the hands with ball-joints — you can get a lot of action out of the giant robot arms. Grab things (take a look at the shot of Strength holding a World War Robot* Square for an idea of what you can do with the hands), make fists, and even hold weapons if you like. Great arms!

But as awesome as the arms are, they’re too heavy for Strength* to hold her arms up in some positions. The shoulder joints really needed to be ratcheting joints that could lock in place to open up the poseablity options. There are some stick-like parts included that plug into the arms to help support the weight, but the sticks are the same color as the arms; an extra clear stand or two would have been a lot more useful than those damned plastic sticks.

The Stand is a Must

Strength* can stand on her own, but the clear plastic stand — which fastens by plugging into a hole in the toy’s back — works very well for displaying the toy. In the photos shown here Strength* is either standing on her own or using the stand; I did not remove the stand from any of the shots so just click on any photo and look if there’s any question as to whether or not she’s being supported in a shot.

So How’s the Toy?

Fantastic! I posted my quick thoughts last weekend and can say that after a week with the toy I’m still impressed. The plastic quality feels great, the sculpt is nice, and the joints are all working without any problems at all. Strength* will definitely not be my last Black Rock Shooter action figure — in fact, the Black Rock Shooter Gold Saw* has already arrived — and I’m recommending that anyone who likes the look of the toy try and find one to hold and play with. It’s really a lot more fun than I expected . . . and I was honestly expecting quite more than I should have because the giant robot arms were looking way too cool in online photos.

I shot a lot of photos of Strength* because I was having fun posing the toy. I’ll close this review by saying that this is a fun, well-built action figure and if you’ve got any interest at all in it and don’t mind spending $50+ on a 4.5-inch tall toy — but don’t forget that the robot arms are massive — then grab one. Unless you’re worried it will make you want more of the Black Rock Shooter toys.

Philip Reed will now open Gold Saw. He’s got his fingers crossed that it’s as much fun as Strength.