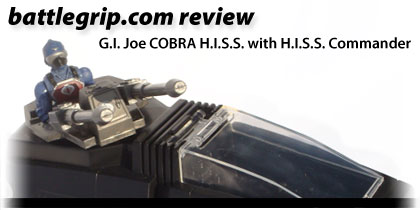 “The Cobra H.I.S.S. tank storms into battle, raking the field with devastating firepower from its twin cannons. Driven by a Cobra H.I.S.S. commander, this armored vehicle barrels toward the G.I. Joe team, intent on cutting a path for the advancing Cobra forces.”
— from the back of the box 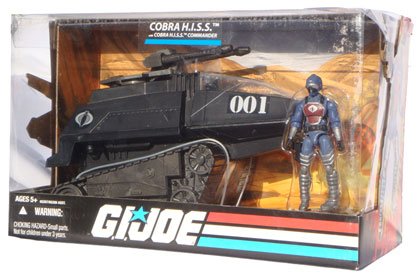 Easily the most recognizable tank in Cobra’s arsenal, the H.I.S.S. — short for High Speed Sentry — is a fairly durable toy, capable of rugged play in almost any environment. (I remember more than one winter of driving an older version of this same design through packed snow; the H.I.S.S. may not look like an arctic vehicle but when it’s what you’ve got then it’s what you use.) Packed inside the box are the file cards for the tank and commander — packed, pre-cut file cards are much better than the cards that are printed on the boxes — as well as the necessary stickers. (There are plenty of those to keep you busy applying them to the H.I.S.S. for just a little too long; I wanna play!) 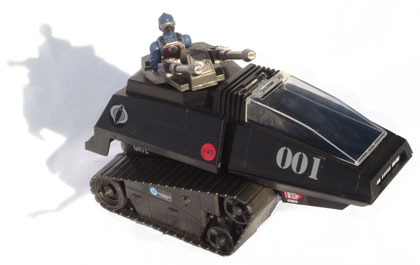 The H.I.S.S. is roughly 10″ long, 5″ wide, and about 6″ tall (to the top of the H.I.S.S. Commander’s head when he’s standing in the turrent), making this a sizable toy that feels great. The cockpit opens, the turret swivels, and the cannons elevate (though it doesn’t look like the turret snaps out, a feature we used to use when playing; the turret was an “escape pod” that was used when the tank was otherwise destroyed). Pegs on the vehicle’s rear can carry other figures into battle though I’ve had trouble getting a few figures to stay securely when rolling the H.I.S.S. across the floor.

One unusual difference between the toy inside the box and the photo on the back of the box is the tank’s numbering; on the box it’s shown with the number “788” while the toy’s number is actually “001.” It’s minor, and not important, but it does make me wonder if there’s a H.I.S.S. out there somewhere with a different number from mine (but it doesn’t make me wonder enough to spend any time looking into the issue). 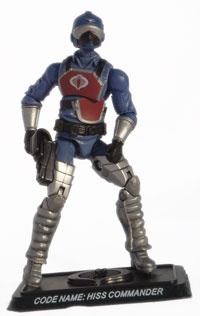 A great-looking figure, the H.I.S.S. Commander comes very close to the original H.I.S.S. Driver from over twenty years ago and, as Patrick Robinson says in his review at www.yojoe.com, is an improvement on the original figure.

“The HISS Commander figure head strongly resembles that of the original HISS Driver, and the rest of the figure has been redesigned with full 25th Anniversary articulation . . . “

The H.I.S.S. Commander sits comfortably in either the turret or cockpit, though fitting him into the cockpit requires a little twisting because the figure’s holster tends to get in the way. Unlike years ago when I played with a H.I.S.S. tank, the figure can be posed inside the cockpit so that he looks less like a lump and more like an actual vehicle driver. The included pistol fits neatly into the holster and the included display stand makes posing the figure pretty easy. (Anyone else remember when the display stands were sold in a separate pack? It’s nice to see Hasbro tossing in a penny’s worth of plastic these days instead of making us buy the stands separately.)

Priced at about $15 in most stores, the Cobra H.I.S.S. is a great buy for anyone who remembers the old G.I. Joe cartoon (even if the cartoon doesn’t hold up these days, many of the toys still do). While the review at www.generaljoes.com doesn’t care all that much for the H.I.S.S. — “While the HISS is a fan favorite, I think I can live a full life without getting it again . . . and honestly, this version doesn’t move me at all.” — I personally think that’s one of those staples that needs to be in any G.I. Joe fan’s collection. And even if you have an older H.I.S.S., or a variant, the new H.I.S.S. Commander design will make a great addition to your Cobra army. Recommended at MSRP and highly recommended if you can get a good deal on one.

Philip Reed is amazed that today, over twenty years since he owned his first H.I.S.S. tank, he has bought a new version of the same, old toy. The figure’s a major improvement over the original, though, and the fact that the tank is still awesome makes it a happy addition to the collection. Cobraaaaa!