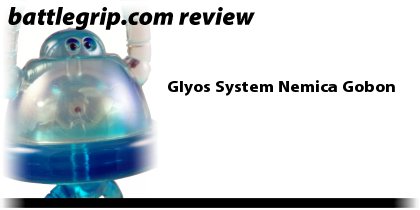 Onell Design and Matt Walker of Dead Presidents Designs worked together earlier this year to give us this shimmering, semi-translucent icy Gobon as part of the Nemica wave of Glyos System toys. The toys from that wave are no longer available, but you can enjoy “The Ghosts of Nemica” game and story over at the Passcode section of the Onell site. For the Glyos story the “Passcode” is pretty much the best online resource; you can have fun playing the 8-bit style games at the site and then come back here for my (very short) review of the Nemica Gobon.

I reviewed the basic Gobon toy earlier this year (review here) and Matt Walker’s Cerberus Gobon last month (review here) so there’s nothing I can really say about the toy’s sculpt and overall design that you haven’t already heard before.

Toy companies around the world reuse molds to create new figures, but Onell Design has taken the practice a step beyond what I’ve seen several other toy lines attempt. By creating both limited, hand-painted runs and limited factory runs — and giving each new colorway a different place in the Glyos universe — Onell is creating a line of repaints and reconfigurations that fans of the toyline rabidly track down. Hell, I’ve got three Gobons (and a fourth somewhere in the postal system) so I’m as guilty of collecting variant colorways as any other fan of the series. It’s a neat world to be a part of.

The photos here, as with every photo I take of Matt Walker’s work, don’t do the paintjob justice. As with earlier Glyos runs by Matt (Hades Pheyden and Cerberus Gobon and War Monger Custom Corps) the paint is smooth, shiny, and gives the toy a look that has to be seen in person to believe. The choice of blue is perfect, making the Nemica Gobon almost look like he’s carved out of a block of ice. I swear that the next time I’m in Matt Walker’s neighborhood I’m gonna kidnap him and suck the painting talent from his soul; it’s unfair that talent this awesome isn’t safely locked away in my garage.

Not at all, but as I already said fans of the series are rapid and want every single colorway. If you’ve never bought any Glyos toys before you won’t understand the love some people have for these, but if you’re already a collector then I’m sure you’ll agree with me when I say that more is always a good thing.

Nemica Gobon is long gone and certain to be one of those toys that fans of the series hunt for. There’s more than likely going to come a point when older fans get out of the series and new fans will try to pickup the older pieces; when that happens I fully expect this guy to go for some big bucks.

There is one problem with my Nemica Gobon, but it’s less of an issue than it would be if this was a factory run and not just a custom: I’m unable to separate the body into two parts. I guess the paint fused the plastic together or something, and I don’t want to use any sharp objects or force the pieces (scarring the plastic and paintjob would be a very bad thing). As a custom I probably shouldn’t be snapping this apart anyway, but I thought it was something I should mention.

The Glyos System Series of toys has to be the best designer toy line of 2009, both because the toys are so much fun to play with (the Lego-like quality is addictive) and because Matt Doughty, the toymaker behind the line, is so friendly and always trying to help his fans.

For another look at the basic Gobon design see this review at CollectionDX.

Philip Reed, in reading back over this “review,” realizes that this is in no way a review and was actually just an excuse for him to play with his three Gobon figures.