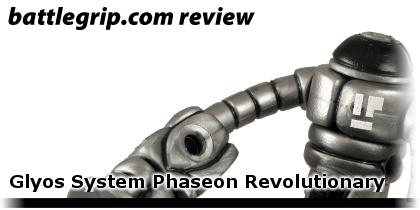 A few years ago there was a Glyos System toy known as the Beanbot. Originally created by beantowntoys.com, these small robot toys were completely compatible with Onell Design’s action figures but a separate entity.

Well, that has all changed. The Beanbot has been recreated and reimagined as the Phaseon, a Glyos System Gendrone that looks right at home next to the Gobon (recently reviewed here). And now it’s time for us to dive into the Phaseon and get a look at this robotic action figure.

At just $6, the Phaseon is one of the lower-priced action figures in the Glyos System series and one of the robotic companions to the Glyans and Travelers of the line. And the 14 parts are enough to allow for a little customization and reconfiguration; you can have hands, a cannon arm, or take the parts and expand the Gobon with extended legs or a new head. And that’s just the options with my limited construction skills; a true master builder can no doubt imagine several other uses for the parts.

One of the things I like most about the Glyos System toys is just how damned tough they are. The simple plug/socket joint and the idea that the parts are interchangeable makes for a toy that can survive the simple bumps, drops, and long distance throws that are a part of playing with action figures. I love the various hinges, balls, swivels, and ball-hinges of modern action figures, but I’ve had more problems with broken joints on today’s action figures than I ever did when I was a kid. And the Glyos System joint is every bit as durable as the older joints of the eighties . . . with the added bonus of quick and easy customization tossed in for fun.

One thing about the Phaseon (and most Glyos System action figures) that stands out is that the toy has very minimal paint applications. Cast in swirly silver plastic, most of the toy’s coloring is actually the plastic. The only paint is the black details and black area covering the abs and head while the white tampo on the chest adds a little more color to the toy.

The minimal paint works, but one thing I’ve been noticing lately (and like) is that Onell Design seems to be experimenting with more color. And the tampo printing we’ve been getting over the last few drops is great; I know these added colors and effects increase the price but I’ll happily pay a few extra bucks every now and then for more detailed colors.

Whether used as a helper or an opponent, the Phaseon is a great retooling of an older toy. I like the new dome head and now that the figure is officially part of the Glyos System line I find myself more attracted to it than I was when it was the Beanbot.

While the Phaseon is not — and likely never will be — a star it’s a fun toy and a great addition to any Glyos collection. And the low price makes it a target for anyone completely new to the line; just make sure to get a few Glyans or Buildman figures because those are more adaptable and customizable and better demonstrate the line than the Phaseon does.

Philip Reed only has a few Phaseons but should snag some more. And once he gets back to the garage he should challenge himself to use one in a custom job; the toy’s probably a lot more modifiable than he realizes.