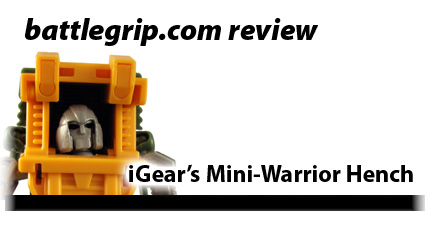 iGear made minor modifications to their Mini-Warriors box design, each of one which was made simply to handle the larger size of the new toy. Nicely illustrated, neatly packaged, the box is professional and Hench is safely packed inside and arrived without suffering any damage. Not an amazing box, but a well-crafted box that looks good.

As soon as I pulled Hench from the packaging I was impressed with the design and size of the vehicle mode. Just about 4-inches long in vehicle mode it wasn’t until I held the toy that I actually realized just what a change in size this guy was when compared to the earlier Mini-Warriors releases. I had been a little concerned that increasing the size would negatively affect the classic Autobot Mini-Car feel of the toy, but now that I’m holding Hench I can say I’m right there with others who have been clamoring for iGear to release the earlier designs in this new size.

My only complaint with Hench’s vehicle mode is that the wheels don’t roll all that well. They tend to stick and driving the truck across any smooth surface just doesn’t work all that great. Fortunately, the robot mode is so damnned fun that I’m unlikely to transform this guy into his vehicle mode all that often.

At about 5-inches tall, Hench fits in nicely with most modern Transformers toys and has one of the slickest leg transformations that I’ve ever seen. Take a look at the pics and notice that there are two wheels on each leg; the two sides of the vehicle mode pop out and collapse together, connected at the knees as the front half of the vehicle’s size pivots back and around to form the outer side of the leg. This is a really nice leg transformation process and is just one of the reasons I’m having so much fun with Hench today.

I think that if you compare the photos of Hench to the Transformers Brawn cartoon character design (see the TFWiki) I think you’ll see that iGear came pretty close to nailing the design. Everything’s angular and sharp, and while Brawn is by no means an exact match for the cartoon he’s so close that there’s little doubt about who this is meant to be. The one point of transformation I would have loved to have seen would be for the vehicle’s front bumper to pivot back; that would have both helped the look and allowed us easier access to Hench’s head. Yeah, just like Rager the head on this guy is tough to pose.

Hench is made of ball joints, with ball-jointed articulation at:

Not a lot to speak of, with most of the toy’s colors coming from the plastic rather than paint apps. But the few spots that are painted — black on the body, windows, and eyes, and some silver here and there — is quite clean. I don’t see any obvious spots of slop and even when cleaning up the photos for this review no ugly paint messes jumped out at me. And in terms of color iGear nailed the classic Brawn look . . . as the photos here that show the original next to this third party Transformers toy show.

iGear did a great job with the first two Mini-Warriors and now Hench blows those first two releases away. The larger size, the ability to store the weapon in vehicle mode in the exact same manner as the 1986 Outback, and the look and feel of the toy are all spectacular. iGear may have started a little slow, but this year they’ve really taken off and are becoming one of the top manufacturers of third party Transformers toys.

I highly recommend this toy to any fan of Brawn — available now at site sponsor TFSource — and can say that if you’re not bothered by the $35 price tag then I think you’ll find a toy every bit as good as the official releases. The plastic feels good, the transformation is inventive without being frustrating, and overall Hench is an excellent design and a great transforming robot toy.

Philip Reed also has UFO and needs to get that unofficial Cosmos opened up and played with immediately.