And here’s where I apologize to anyone who went out and pre-ordered this toy based on my review of the original Spray (review here) and my posts talking about how cool iGear’s Mini-Warriors toys are. The basic Chrome Spray is as excellent as the original version of this unofficial Seaspray, but the vac-metalizing process makes this a stiff action figure that instantly has problems when you transform him from vehicle mode to robot mode. 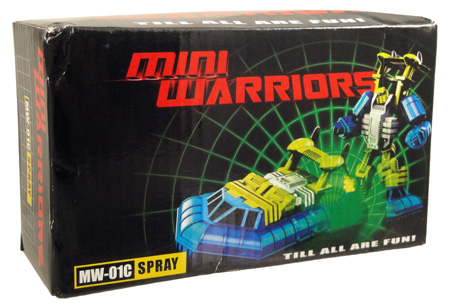 The Basics Are Great

See my review of the original Spray for more pics and for all of my thoughts on the toy’s two modes. Physically this new toy is identical to that one, so everything I needed to say you can find there. I know you guys seem to enjoy when I rattle on and on, but for this review I want to mainly stick to pics and explain why I regret ever recommending this toy before it was even in my hands. 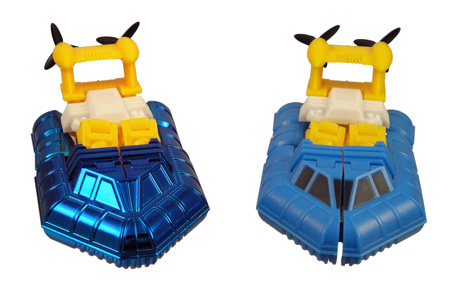 iGear engineered their unofficial Seaspray with little tolerance I guess, because the very thin layer of shiny material added during the vac-metalizing process makes the joints — especially the elbow balls where vac-metal rubs vac-metal — very tight. “I’m scared I’m gonna snap this when I transform it” levels of tight. So tight, in fact, that I don’t see myself transforming the toy again and I’m unlikely to change his pose all that often. 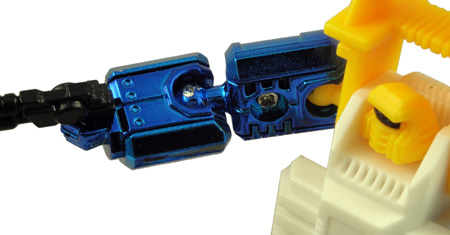 Look at the elbow joint in the above photo and you’ll see where the two vac-metal parts rubbing has ripped material away, leaving non-blue on the elbow ball. What is worse is that the left arm has worn so much — after less than a dozen times transforming the toy — that the arm tends to separate at the elbow now whenever I move the arm. It snaps back into place easily, but after how incredible the rest of the Mini-Warriors series has been I expected more out of this Chrome Spray. 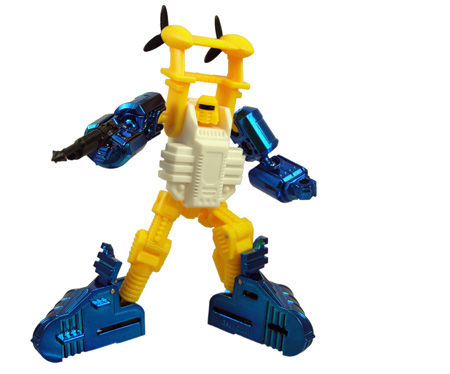 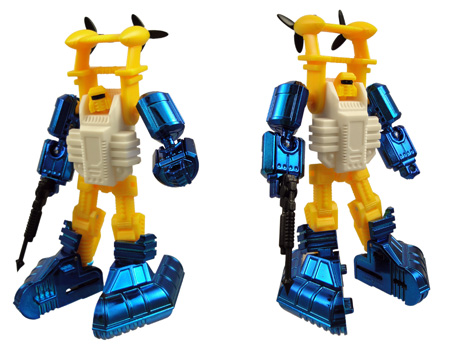 It’s clear to me that the vac-metal is the problem with this toy. The shiny blue looks very cool, but the toy would have been much better if iGear had somehow masked the joints and shielded them from the vac-metalizing process. The stiffness is an annoyance, the arm dropping off is frustrating, but it is really those bare spots that make the toy simply look far less cooler than it should.

I’m not canceling any pre-orders or dropping the Mini-Warriors line, but I will be far more careful when it comes to vac-metalizied toys in the future. This Chrome Spray was a great idea, but the execution has left us with the first real stumble in what has previously been a remarkable series of unofficial Transformers toys. 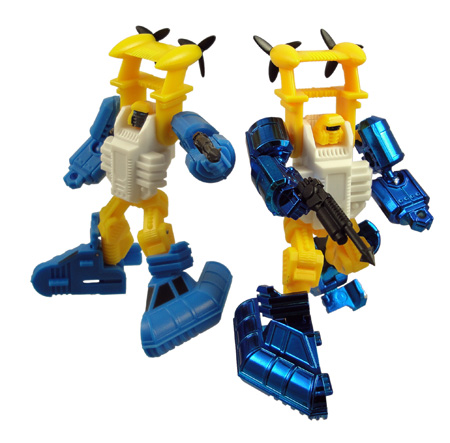