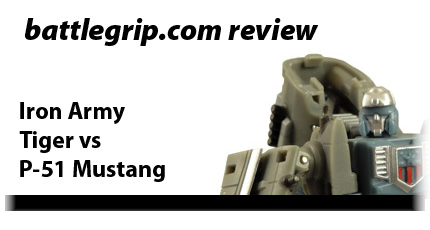 After looking at the Iron Army T-34 vs J7 Shinden set from TFC Toys a few days ago (review here) I wanted to be sure to get the second set online quickly while the first was still fresh in my head. Another add-on to the official Transformers PCC Bombshock*, Tiger vs P-51 Mustang is so much like the first set that it’s kinda scary. Not surprising, but the size and transformation of these little guys is so similar to the first set that I’m shocked TFC Toys actually created new tooling and didn’t simply re-color the first set.

Below you can see Tiger and P-51 Mustang next to the official PCC Bombshock* which should give you a good idea of how the toys look together. These are great little WWII vehicles and they’re almost identical in feel to the earlier toys in the series that I reviewed.

And since these are so similar in design and feel there’s actually not a lot to be said about them that I didn’t say before. P-51 Mustang seems to snap together a little better than the J7 Shinden did — in this plane the rear section snaps off to become the weapon — and again I like the tank better than the plane. Seriously, tanks are just more fun.

Holding all four toys I can say that your choices come down to either skip the toys or buy both available packs. Owning just one of these two sets would be weird, so if you’re considering buying these at all I suggest buying them both at once. But, and this is kinda tough to say, unless you’re just set on having WWII-themed Combaticons skip these guys and spend the $80 you save on something cooler. These are okay, but they’re not great.

From the feel to the articulation these are almost identical to the Iron Army T-34 vs J7 Shinden toys (review here). The tank is the better of the two robots and everything I said about the first set’s robot designs holds true here. I guess I shouldn’t be shocked since these are a team and meant to work together, but to find near-identical transformation designs and articulation was not what I expected.

Scan the rest of the pics for a feel of what you can expect from the Iron Army toys, and check back over the next week for a final Iron Army review as I transform these guys into their limb modes and combine them with the official Transformers PCC Bombshock*. The parts work better than I expected, but it takes pics to really demonstrate just how well they work as limbs.

Philip Reed is off for a short trip and expects updates to be infrequent over the next few days. But he’ll be back by the weekend to share more toy fun with everyone.