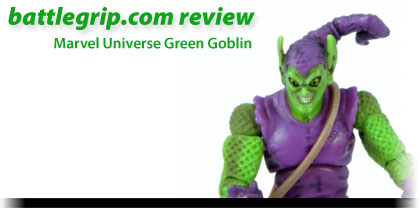 “Although Spider-Man was stronger and faster, the Green Goblin’s deadly arsenal and his ruthless cunning made him more than a match for the wisecracking wall-crawler.”
— from Spider-Man: The Ultimate Guide

After reviewing Spider-Man it would simply be wrong not to take a look at the evil, insane, and just plain fun Green Goblin, one of the first releases in the Marvel Universe series. As with most of the masked action figures in this series, the Green Goblin looks great and he is easily one of the best figures in the initial wave.

As with the other figures in this series that I’ve already reviewed, the Green Goblin comes on a basic card with clear blister. The artwork’s beautiful, the design quite attractive, and the card back shows us three other figures in the series — Captain America, Ronin, and the Grey Hulk (who I’ve now seen, but skipped because I’ve already got a Green Hulk). I like how showing just a few figures in the series gives the designers room for text and a large picture of the Goblin, but looking at some other packaging designs I think I’d rather see all of the available figures instead of the descriptive text and Goblin photo. After all, we all know who the Green Goblin is and we can see the actual figure through the clear blister on the front of the card.

As a toy, the Green Goblin’s a great piece, as good as many of Hasbro’s other popular 3.75-inch action figures (namely, G.I. Joe and Star Wars figures) and — as I’ve already said — one of the best releases in the initial wave of Marvel Universe figures.

The Green Goblin’s articulation is as good as any other release in this series, with quite limited articulation at the hips, hinged knees, feet, and elbows, twisty wrists and ankles, some head movement (very little, actually), and the mid-torso twist. He’s missing a point of articulation at the waist and the sculpting restricts a lot of his leg and arm poseability options (the right arm, especially, can’t swing up much at the elbow), but overall he’s perfectly adequate (and blow’s Mattel’s DC Universe Infinite Heroes line out of the water) for a toy. If you’re looking for a sculpture for display purposes look elsewhere; if you’re looking for a Green Goblin toy then keep reading.

The Green Goblin’s paint job is pretty good, though the only actual paint is some faint brushing on the green arms and legs and the facial details; most of the green and purple pieces are molded plastic rather than paint. That’s fine with me, especially since Hasbro did a good job with the face, but please don’t pick this figure up expecting anything more than an action figure.

The Green Goblin comes with more accessories than any other Marvel Universe action figure I’ve seen so far. With a satchel, pumpkin bomb, and glider, the Goblin’s ready for battle and — for those of you who love to use accessories to dress up figures — he’s ready to lend his gear to other action figures in your collection. (The satchel is the most tradeable piece, and looks good on most small action figures.)

To be honest, this might be the first figure in the series that I’ve seen who has accessories that I’m actually happy with. Rather than a stupid-looking blast effect the designers actually him some useful, appropriate extras.

“Armed with razor-sharp weapons, empowered by a strength enhancing serum and driven by a maniacal insanity, the Green Goblin has long been Spider-Man’s deadliest opponent. But only two years after Peter Parker first encountered the Goblin did he finally learn his foe’s true identity: Norman Osborn — the wealthy, industrialist father of his collegiate roommate and best pal, Harry Osborn.”
— from Marvel Encyclopedia: Spider-Man

If you’ve already got a Spider-Man then you need a Green Goblin. The Green Goblin is every bit as good as Spider-Man — better, even, because he has useful accessories and a better paint job — and looks great in any action figure collection. The only serious complaint that I have with the Green Goblin is the price tag; at $8-$9 he’s just too expensive for what you get. Hasbro’s G.I. Joe and Star Wars figures are priced $7-$8/each and most include more accessories. All I can take from this is that we’re gonna see a price increase on other Hasbro 3.75-inch figures very, very soon.

Philip Reed loves the Green Goblin figure. Great accessories, a beautiful sculpt, and excellent poseability makes this one of the better Marvel Universe action figures. That said, though, he wants a Hobgoblin.