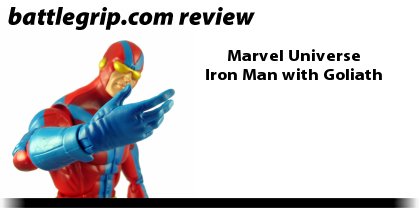 “With his size-changing powers growing ever more refined, Henry Pym returned once again to the Avengers to adventure alongside his fellow founding member Iron Man. Combining size and raw power with the latest in advanced transistors and magnetic repulsors, the gigantic Goliath and the invincible Iron Man protect mankind from ancient gods, evil robots, and beasts from deep within the Earth.”
— from the back of the box

Here it is, the first of two Wal-Mart exclusive 3.75-inch scale Marvel Universe* sets that were recently released. I chose to review Iron Man with Goliath first, saving the Captain America vs. Skrull Giant Man set for a later day. Why did I choose Iron Man with Goliath first? Only because I’m still reading the collected Captain America trades and I haven’t yet hit the collection in which the new suit comes into play. I don’t know if that’s a good enough reason for choosing this set first but that’s what I did so there’s no reason to think about the choice any longer. No, let’s concentrate our efforts on taking a very close look at this first Gigantic Battles set.

It has been several reviews now since I had anything to say about the Marvel Universe packages, but that’s only because I’ve been reviewing single-carded figures and once you’ve seen one card then you’ve seen them all. Well, with Gigantic Battles we get new packaging — over-sized boxes — and overall the package fits perfectly with the carded figures. The set uses the same basic color scheme and back design, and we even get a mention of the Fury Files website. What’s missing, though, is a number on the set. I guess that like the Secret Wars packs the guys at Hasbro didn’t want to make this part of the basic figure collection.

Unfortunately, they also didn’t give us the file packs or codes that we get with the single-carded figures. That sucks, since that means I can’t add these guys to my growing Fury Files collection.

The box is simple, attractive, and completely disposable. It also shows Goliath as a blue and yellow action figure when mine’s red, blue, and yellow. It sounds as if the blue/yellow is a variant set (this thread at Hiss Tank has some info), but so far I haven’t seen a blue/yellow anywhere. If the variant exists I’m not all that worried about it. It looks good, yeah, but not so good that I think I need both versions.

Yes, this is another Marvel Universe Iron Man action figure, this time taking the Golden Avenger Iron Man figure (review here) and giving it a new right hand, a new head, and a seriously inferior paint application. This design’s most remarkable change has to be the head, which has a horned/winged appearance that immediately identifies it as the Proto-Classic design (see this page at www.ironmanarmory.com for a close look at this armor).

The Proto-Classic Iron Man makes a great addition to my Marvel Universe collection of Iron Man armors — and I’m a bit surprised that Hasbro went with this very old design — but, as I mentioned, this figure has a terrible paint app when compared to the Golden Avenger suit. The colors are fine, with the red closer to the basic Iron Man (review here) and the yellow paler and dirtier than the Golden Avenger’s coloring, but Hasbro skipped the black line detailing that they used on both the Golden Avenger and Silver Centurion (review here) suits. Bad choice, Hasbro, because that black detailing dramatically improved the look of those other two Iron Man figures.

Other than the missing black details, this figure’s paint is adequate, with hardly any sloppy areas (there’s a little red on one leg, but nothing terrible). Unfortunately, I loved the black detailing so much that seeing a new Iron Man figure without the detail makes me think Hasbro cut some corners on this set. And that’s a major problem, since Goliath has problems that, when combined with Iron Man’s problems, make this a set that you can safely skip. (But we’re not quite to Goliath yet . . .)

I could have forgiven the reduced paint apps if Iron Man hadn’t come with a warped leg. Why do toy companies insist on packing action figures with so many twist ties, formed insert trays, and rubber bands that the figures are warped and distorted? Please, guys, just give us the toy in a simple blister and STOP over-packaging these things. Iron Man’s right leg is horribly warped, bowing out so far that I can’t get him to look like he’s doing anything except getting ready to go in for hip surgery.

I don’t care how “dramatic” the packaging looks with posed figures. Just give me toys that aren’t damaged because of the packaging. This may have been a lost secret, but a product’s packaging is both to make it attractive and to protect it. If the packaging damages the item then the protection job has failed.

Coming in at about 12-inches tall, Goliath is an imposing figure that really towers over every figure released in the line so far (excluding the Skrull Giant Man). He feels heavy, solid, and has extremely tight joints that require some serious force to get him to start moving. Unfortunately, despite his size his articulation isn’t anywhere near as good as the articulation on the smaller figures in the line.

Goliath has ball-hinge hips and shoulders, double-hinged elbows and knees, swivel-hinge feet and hands, a ball-jointed head, and that unusual ab crunch feature that doesn’t always look as good as you’d expect. He has no waist articulation at all, which means that his body is forever facing forward. Really? They couldn’t at least give this guy a simple swivel waist? That feels like a very, very poor choice in the figure’s design.

I know that the articulation actually isn’t all that different than what we see in the smaller figures in the line, but that lack of waist movement really bothers me. In a figure of this size I can’t understand why someone would choose to lock the waist in place like this. That feels like a very poor decision.

Goliath’s paint detailing is a lot more involved than Iron Man, but multiple shades of red plastic on the arms/legs and body are just different enough that the coloring looks off. The line work is pretty tight, with barely any slop where the blue meets the red, and a dark red airbrush effect adds shadows, but overall this is actually not much better than what we’ve seen on the best of the Marvel Universe paint apps. I suppose that’s appropriate, since a significantly better paint job would have made this guy look like he came from a different line. What’s here is decent — awesome, when compared to Iron Man’s paint — but it’s nothing so spectacular that it pushes this okay figure past the realm of just another release in the series.

And that kinda sucks, since I was really looking forward to these larger figures.

I wish I could tell you that this is an amazing, must-own set, but what we have here is a less than stellar effort from Hasbro for their first over-sized figure for the 3.75-inch scale Marvel Universe series.* Between Iron Man’s bum leg and bad paint and Goliath’s minimal articulation and just plain “blah,” this pack is a lot less than I had hoped for.

Goliath is massive, much larger and heavier than he appears in photos, but he’s not so massive or cool that I’m going to recommend that anyone but the most dedicated of Marvel Universe collectors pick him up. I’m glad I have him now, and the Proto-Classic Iron Man really does look neat with the other suits, but I can honestly say that if I had seen a detailed review before I encountered this pack on the shelves I might have passed it by.