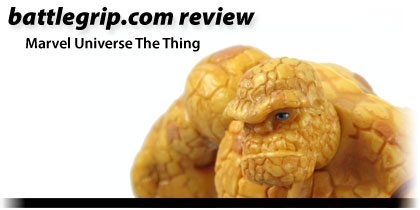 “There was a time when Ben Grimm was consumed with anger over the hideous change wrought on his body by overexposure to cosmic rays. Over the years, he has come to accept his new look, and revel in the strength and invulnerability that came with it.”
— from the back of the card

What the hell happened? Up to this point, I’ve been pretty happy with the Marvel Universe 3.75-inch action figure series. I’ve picked up several releases in the line, and posted more than a couple of reviews, and other than minor issues the line has been excellent.

Well, The Thing has walked in and ruined that record.

This latest wave of Marvel Universe figures uses the same card design as earlier releases, so it’s not worth spending much time looking at this. I do want to point out that this time around the three other figures shown on the back are Iron Man (do we need a third Iron Man already?), Ms. Marvel (there’s also a second Ms. Marvel out there), and Black Costume Spider-Man (who actually looks good enough that I may end up grabbing him).

I was at first worried that The Thing would be little more than a slight resculpt of the Marvel Universe Hulk action figure (review here). Happily, Hasbro put the time and money into a completely new sculpt that looks spectacular. He’s big and rocky, with the perfect pants and boots, and a great head (a huge step up over the ugly Hulk head that Hasbro gave us). Overall, The Thing looks perfect. From his jutting forehead to his rocky skin I love every part of the figure’s sculpted details.

And the painting, what little of it there is, is also excellent. Even though most of his rocky skin was cast in an orange plastic, Hasbro sprung for the extra painted details, with some of the rocks in a darker orange and a wash bringing out the details. And the face is great, with The Thing’s blue eyes painted perfectly without any sloppy overpainting or near-misses. Yeah, if it wasn’t for The Thing’s articulation this would be a great action figure.

This is where it all falls apart. The Thing has a head that turns on his oversized neck (like the Hulk’s) and would have been better as a ball joint, but this works for a beefy character. His hips and shoulders use hinged ball joints that, unfortunately, have hinges with a slightly greater range of movement than Mt. Rushmore does. The wrists twist around, the knees and elbows twist and hinge (again, with very little range of motion), and the feet are hinged. The mechanical aspect and choices of the figure’s articulation aren’t terrible, but the fact that the sculpt gets in the way and blocks his movement is — as always — a poor showing on the part of the designers. I understand that large characters with over-sized muscles cause problems for articulation, but I would have thought that Hasbro would have found a workable solution by now.

The real articulation problem — besides the fact that he can’t move his forearms much — has to be The Thing’s legs and the way that he stands. Like the Hulk, he’s constantly bowlegged and looks like he’s just about ready to squat down. It’s not an attractive pose and, unlike the Hulk, he’s also got that really ugly left knee joint. It’s terrible.

Besides the Fury Files folder and secret code, The Things comes with nothing. Yes, he’s a massive figure, but he’s not as big as the Hulk so it would have nice to have seen something included. A stand, for example, would have been nice.

What was turning out to be a great new toy line has been damaged by a weak figure with great sculpting and paint and awful articulation. The Thing is pretty solid, standing in a variety of poses, but since every pose leaves him with goofy legs and the ability to move his right forearm about a mm, he’s not as much fun as I was expecting him to be.

This doesn’t destroy the entire line, but it does mean I’m going to be a bit more careful when buying new releases in this series. If you’re a casual Marvel fan then you can probably give this guy a pass and wait for a better version (after all, with two Hulks, two Spider-Mans, two Ms. Marvels, three Iron Mans, and two Punishers released in under two months I think we can expect another version of The Thing). A dedicated, hardcore Fantastic Four fan, though, will probably want this guy just because he really is a nice sculpt of the character.

I hope the next toy I open in this series is better than this one.

Philip Reed never really liked the Fantastic Four when he was a kid, and isn’t exactly a fan of the team today. It always felt like they were causing problems for the Marvel Universe. Spider-Man’s black costume is an alien? The FF at work. A world of Beyonders located? Again, the FF. Thanks, FF. Thanks for nothing.