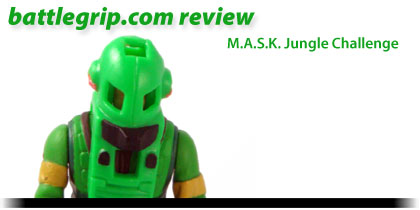 But, Kenner needed more low-price point items so, by the second year of the line, they started producing smaller figure/accessory packs titled “Adventure Packs.” These inexpensive packs included a figure, a tiny vehicle-like item (usually a backpack), and some assorted other junk. Not exactly the most exciting toys, but they were official M.A.S.K. toys and worked out perfectly when all you had was $5 and you really didn’t need another Condor (which I reviewed earlier this week, if you’re interested).

Built out of what appears to be the basic Matt Trakker body (the original version that was included with the Thunderhawk), this Matt Trakker stands out from the pack because of his bright green and yellow outfit. His “Arrow Mask” appears to be unique to this pack; I can’t match it up to any of the other “masks” in my collection (though, to be honest, I don’t have anywhere near a complete set).

“Matt Trakker of M.A.S.K. with Arrow Mask which pretends to shoot thunderbolts.”
— from the back of the card

Matt has the typical M.A.S.K. action figure articulation: his head turns left and right, his arms raise up and down at the shoulders, his legs move at the hips, and his knees are hinged. Imagine a 1979 Star Wars action figure with knee articulation and you know Matt’s total range of movement and all of his poseability options. Basically, standing rock or sitting rock.

As with every M.A.S.K. toy, Matt Trakker’s Jungle Challenge pack is more about the vehicle/accessories than it is the action figure. Besides the mask itself, the main accessory in this package is the “rocket backpack” with retractable wings. Take a look at the image at left, the rear view of Matt wearing the backpack. At the bottom of the pack is a dark green lever; push this button up and the backpack deploys stubby, yellow wings out of each side (see photo below). These wings aren’t actually large enough to do anything at all, but since this is a toy — and the designers were working within the limitations of the toy’s size — I can accept these little wings. Yes, they look goofy. But that pretty much nails what M.A.S.K. is all about, any way.

Other accessories in the pack include a red crossbow weapon that snaps onto Matt’s arm, a utility belt (that fastens around Matt’s waist with a simple slide the belt in the hole system that was pretty standard at the time), a thin line with attached “scaling hooks” (again, another standard toy accessory for the mid-80s; I remember several times cutting one of these lines so that I could use a longer length of fishing line or yarn to extend the line’s range), and a red “binoculars” piece that fits over Matt’s head (see the photo, above).

Out of all of these accessories, the scaling hooks/line have the most play value (speaking from experience since, as I said, I used to play with this exact sort of accessory when I was a kid) while the utility belt and backpack are the coolest pieces. The crossbow isn’t really all that useful — I mean, Matt already has his “Arrow Mask” to use as a weapon — but it’s definitely more exciting than the binoculars.

The M.A.S.K. Jungle Challenge, when it was first released, filled an important role on toy shelves and the allowance limitations of children across the country: a low price item that allowed a kid with only about $5 to buy a new M.A.S.K. toy. Today, though, since the item is almost certainly only going to be picked up by toy collectors in their mid-30s, it’s got to be one of the last items that a M.A.S.K. fan purchases for his collection.

Jungle Challenge is a fairly mundane, simple M.A.S.K. expansion that completely skips the most important piece of any M.A.S.K. toy: namely, the transforming vehicle. The backpack tries to fill that roll — with its pop out wings — but it’s more of a fun oddity than it is a fantastic vehicle.

If you stumble across the Jungle Challenge at a good price — $10 or under — and want to collect M.A.S.K. toys then go ahead and grab it. Otherwise, give this one a skip and instead keep looking for one of the M.A.S.K. vehicles (the Slingshot is pretty cool). After all, this is really just a repainted action figure with some goofy toy accessories. A perfect toy for 1986 but a not-so-great collectible for 2009.

For more photos of the Jungle Challenge, and other M.A.S.K. “Adventure Packs,” scroll down to the bottom of this page at www.virtualtoychest.com.

Even though he just finished basically saying “don’t buy this,” Philip Reed has to admit that he owns a MOC Venom’s Revenge “Adventure Pack” (don’t worry, it’s gonna be ripped open).