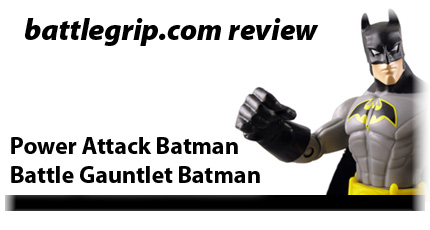 Time for a look at another Power Attack Batman series action figure (Amazon.com search*, at Entertainment Earth*), and this time it’s one of the tamer of the Batmen in the line. After taking a peek at the brightly-colored Thermo Attack Batman (review here) and disgustingly-colored Toxic Takedown Batman (review here) I figured our eyes could use a little bit of a break. And that’s where the black and gray Battle Gauntlet Batman enters the picture.

While the two earlier reviews I posted were variants on the same sculpt, this Batman action figure is a completely different sculpt, and everything points to this being Kenner’s . . . I mean, ah, Mattel’s . . . stripped down, basic Batman body for the Power Attack Batman series (Amazon.com search*, at Entertainment Earth*). I noticed that this figure, minus the cape, was used for a couple of small vehicles which I suspect we’ll see happen again if the Power Attack line does as well as I expect that it will.

And the sculpt is every bit as good as the earlier Batman sculpt in the line. He has massive fists, kinda pointy feet, and the detail lines of the costume are kinda similar to the Batman costume as designed by Jim Lee. The head appears to be the same as the one used in both the Thermo Attack Batman (review here) and Toxic Takedown Batman (review here) action figures, but that’s really not an issue at all. After all, all three toys are Batman.

This slimmer, unarmored Batman design must have had a bit more cash left in the budget because the Battle Gauntlet Batman, like the Twin Blades Batman* that I still need to review, comes with a cloth cape that makes the sculpt look even more Batman-like than the armored action figures. At first I was kinda unhappy and wanted a plastic cape like was used in the Play Arts Kai Batman (review here), but after a few weeks with the toy I think I’m loving the cloth cape. It just feels right and more toy-like, and I think it’s the fact that this line is one of toys first (and “collectibles” second) that makes it so much fun.

Below you can see the “Battle Gauntlet” accessory that gives Battle Gauntlet Batman his name. Unfortunately, this accessory is the worst I have seen in the line. It doesn’t have the necessary tip to be fired from the Total Destruction Batmobile and Batman can’t even really hold the thing neatly. Sure I managed to get it into his hands for the photo, but the accessory makes the toy misbalanced and generally just isn’t as cool as other accessories in the line. I’m calling this the one weak spot in an otherwise awesome action figure.

Not bad at all. Not stunning, but the paintwork on Battle Gauntlet Batman is fairly clean and the subdued colors look good on the toy. Most of the color — gray — appears to be the toy’s base plastic color, but the glossy black of the details and the painted spots of the head are all well done. Perfect? Not at all. But very nicely done for a mass market action figure and better than we’ve seen with a lot of Batman toys that have been in stores over the last couple of years.

Another fantastic piece in the Power Attack Batman series (Amazon.com search*, at Entertainment Earth*), and probably the first of the Batman toys in the line that I’ve reviewed so far that any Batman fan can enjoy in their collection. I feel that it was pretty smart of Mattel to offer a more traditional Batman figure in the line, but I am quite happy that they at least kept the wonky proportions and didn’t try to make a “realistic” Batman toy.

If you’ve not yet grabbed any toys in this series then this might be a good one to try . . . assuming, of course, that the insane colors of the toys I reviewed earlier don’t excite you.

Philip Reed has more Batman toys to share with you . . . but he still doesn’t have the Mr. Freeze from this series.