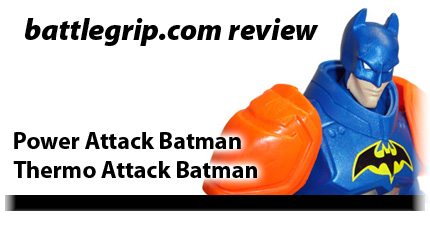 It felt like Kenner was back and it was the 1990s when I spotted the new Power Attack Batman action figure series (Amazon.com search*, at Entertainment Earth*) at Wal-Mart yesterday. And as soon as I saw the bright colors and stylized designs I just knew I had to get a closer look at the series. And now that I’ve opened and examined Thermo Attack Batman I can report that I will be buying more of these very soon.

Attractive and eye-catching are the key words here, with the larger blister popping out on pegs and the Batman illustration on the cover looking quite excellent and fun. As you can see, not only is the card front nicely designed but the back also features an illustrated scene showing Thermo Attack Batman going up against Ice Blast Mr. Freeze. I’m assuming Mr. Freeze isn’t out yet . . . either that, or I need to hit every store in the area until I find him. I also like that the Power Attack Batman line has subseries; this one, as the card shows, is from the “Arctic Mission” subseries.

Fantastic work on the sculpt! I love that Mattel went for an angular, sharp-lined and hard-edged approach to the character designs rather than a more realistic style. At a glance it looks like there’s a lot of parts reuse across the line — which isn’t shocking, considering how many different figures I spotted in the store yesterday (photos posted here) — but that’s okay since Mattel used colors to really make each figure quite different from the others. The shoulder pads, gauntlets, and belt are all separate pieces that have been glued to the basic body; this really helps give the figure some depth and weight.

This is where the series is going to lose some collectors. But, to be fair, the colors of the figures is also what made me notice the line and I suspect it’s also what is going to attract kids to the Power Attack Batman series. The orange weapon, shoulder pads, and gauntlets are all cast out of orange plastic so there are no paint issues there. I think the base body is blue plastic with a shimmery/metallic effect, but I can’t be completely sure if that’s the plastic or the paint.

Regardless of what is paint and what is plastic, overall Thermo Attack Batman’s paint is pretty good. There’s a little flesh on the cowl, there’s a couple of silver spots where they shouldn’t be, but in terms of problems that’s basically it. And for $9 for a 6-inch scale action figure I can live with those couple of small spots; compared to what a new G.I. Joe figure would have cost me — $9 — I can accept this paint and not get upset because there’s a fleck of silver where there should be metallic blue.

I know that’s some extremely limited articulation, but at $9 and as a line clearly designed for young kids I think it’s just fine. Sure I would love to have knee joints and maybe some swivels in the wrists, but Thermo Attack Batman will stand proud and bright on the shelf, holding his weird “thermo saw” up for everyone to stare at and say: “What the hell is wrong with that Batman?”

The Power Attack Batman action figure series (Amazon.com search*, at Entertainment Earth*) isn’t for everyone. It jumps right on the theme of “a Batman action figure for every crazy thing we can think of today” and combines that with bright, disgusting colors that aren’t at all authentic to the comics. But for those of you like me who can appreciate the madness of the designs and color choices I suggest buying one of these and checking them out.

I personally love the sculpts and colors and will buy more. Do I wish that the figures had a little more articulation? Yes, but the limited articulation isn’t going to keep me from adding more of the rainbow Batman toys to my shelves.

Philip Reed now kinda regrets not keeping his old action figure collection that he sold off and gave away a decade ago. He just thought there wasn’t time for toys. Stupid Philip.