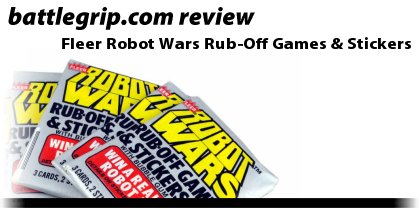 Coming at us from 1985, a year when Transformers were huge news, these Robot Wars trading cards and stickers from Fleer were an attempt to capitalize on the popularity of robot toys without bothering to get a license or even sink a lot of time and money into robot designs. When I ran across five sealed packs of Robot Wars trading cards I just had to have them; a low price for five packs of cards from 1985 couldn’t be overlooked.

Unfortunately, what I got wasn’t at all what I expected.

Each pack is pretty basic in design, with the front of the pack promising us 3 cards, 2 stickers, a stick of gum, and even a chance to win a real robot. For thirty cents a pack (according to the display photo over at www.retrojunk.com) that’s a pretty good deal, even for 1985.

The Robot Wars logo on the pack makes me think that the designers at Fleer were trying to capitalize on both Star Wars and robots at the same time, but the lack of exciting robot art on the pack probably hurt sales a lot more than the Star Wars-like logo design improved sales. Overall the pack design is dull, uninspired, and wouldn’t have really attracted my attention in 1985.

One Good Pack Out of Five

Before clicking “buy” at eBay I poked around the web for info on the Robot Wars trading cards which led me to the Retro Junk article where the author makes it quite clear that these packs are not at all exciting or beautiful works of art.

“Here’s the breakdown of what you get in a pack of Robot Wars cards. Three game cards, one robot sticker and one card of stickers to add to your existing robot toys.”

Well, the game cards didn’t interest me all that much, but the robot stickers looked well worth the purchase price. So I ordered the sealed packs, knowing I’d end up with a stack of lame game cards, five “apply to robot toys” stickers, and five cool robot stickers.

Didn’t happen. Out of the five packs that I opened, only one included stickers. The other four packs each included five game cards; not a single sticker to be found in those four sets. Ouch! And there isn’t even anyone to complain to, since the seller had no way of knowing that these packs were duds and Fleer is dead. Nope, I got stuck with a stack of worthless cards and only ended up with two stickers.

The sticker shown above is the one good card I got out of all 25 cards from the five packs that I opened. This sticker, showing a robot identified as Turbo (The Screecher), is exactly the type of card that led me to order the pack. The art’s not the greatest in the world, but it’s a weird robot and — in my opinion — a fantastic design. Unfortunately there wasn’t a checklist card or a number on the sticker so I’m not sure how many robot stickers were in the set; it’s gonna be pretty tough to track down a complete set of these stickers if most packs are missing a sticker and I can’t find a complete list of the stickers that were published in the set.

The second sticker (shown above) is a card with nine different stickers that were intended as decoration for robot toys. The idea was that kids would peel these off and apply them to Transformers or Go-Bots toys. These are also kinda neat — and a great idea that I would have loved in 1985 — but again there’s no way of knowing how many different sticker sheets were included in the set.

The back of each sticker is exactly the same and provides us with instructions for entering the contest to win a robot. The contest ended in July of 1986 so there’s not much point in trying to enter today.

And here’s what I got a stack of, the game cards I wasn’t even all that interested in. Again, there’s no checklist or numbers to tell us how many different game cards are in the set, but I’m going to guess four since out of a total of 23 game cards I’ve only got four different designs.

Each of the four different game cards requires you to scratch off boxes in an attempt to either complete a race, score a lot of points, or find your way out of a maze. Yep, even with only four game cards the guys at Fleer had to reuse the same gimmick. (Two different mazes appear in the set.)

I didn’t bother scratching any of these off. Maybe if I’d gotten the stickers I was expecting I’d be more interested in trying at least one of these games, but the lack of stickers has me pretty disappointed with the entire set.

I was excited when I saw these in the mailbox, but that excitement faded fast when I realized that out of the five packs of cards I was only getting one cool robot sticker. I may order some more of these packs if I find them cheap online, but at this point I think I’d rather find the individual robot stickers than risk opening another pack loaded with nothing but game cards.

Robot Wars shows just how different 1985 was when compared to today. Back then the trading card companies gave us lots of odd and screwy non-sport card sets, including a lot of stuff that didn’t have any existence beyond the card set itself. That’s not the sort of thing we see much of these days, though Monsterwax (mentioned here) appears to be trying to give us cool non-sport trading cards.

Robot Wars was a terrible disappointment for me, but only because I didn’t get the robot stickers I was expecting. The one sticker I did get looks neat, and if you run across these very cheap you may want to buy a pack or two. (Especially if you can remember playing with robot toys back in 1985.) This is a potentially neat set of cards, but without any real info online it’s difficult to know just how hard it would be to collect a complete set.