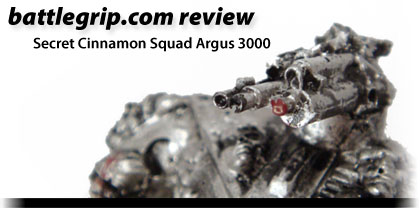 “Argus 3000 was built by Dr. Hercules for purposes of magic. His multiple faces, personalities, and memory chips all have different types of magic knowledge. Argus 3000 went rogue six years ago. He enjoys killing, whistling and falconry.”
— from the back of the card

While poking around the web last week I encountered a post at ToyREvil that sent me over to the Secret Cinnamon Squad website. I’d never heard of Secret Cinnamon Squad before, but their Argus 3000 resin toy, limited to 16 pieces — only 10 of which were released for sale — looked weird enough, and cool enough, that I decided to make this my first bootleg toy.

Argus 3000 made his way very quickly through the mail and is ready for inaction. Let’s watch him stand there.

In a post at October Toys, the Argus 3000 packaging was described as:

“They are bubbled and set on a full color cardback like an old Star Wars or GI Joe figure from the 70’s and 80’s.”

The card back’s an entertaining work on its own. The toy is “For ages 76 and up,” has a pretty funny warning, and a block of text on the card makes it very clear that the figure should not be removed from the packaging. Well, I can honestly say that I didn’t work very hard to remove him; the plastic blister was already kinda separating from the card back when I opened the box, so a slight push with my finger was all it took to free him from the pack.

Argus 3000 is a solid chunk of hand-cast, hand-painted resin and has no articulation whatsoever. The actual design is great, with the piece made of — what looks like — several other action figures that have been chopped up and reconfigured into a new toy. I think my favorite part of the design is all of the faces and skulls that are scattered across the body (see the photos, below).

Besides the faces in the design, you can also see 80s-style action figure joints at the shoulders (The Corps! figure used as a base?), a 1986 copyright on his back, and a weird cannon for a face and a gun in place of his left hand. I don’t recognize any of the individual parts, but I suspect some of the smaller skulls on the figure are taken from wargame miniatures (either that, or the designer is an excellent sculptor and did a great job of sculpting these tiny skulls).

Update: Actually, I’m starting to think that a Captain Power action figure was used as the base. The shoulder joint’s a pretty good match, and the techno-armor design of the figures could be hiding under all of these faces.

It looks like Argus 3000 was hit with a silver spray paint and then attacked with a black wash. After that, some red and blue details were added — just tiny spots of color on an otherwise grim, futuristic paint design. I could see this as something out of a Terminator-like future, or maybe an evil B.A.T. prototype gone wrong.

As I mentioned a few days ago, in an unrelated post, resin may be “the new vinyl,” but I don’t think that solid resin statues without any articulation qualify as toys. Art objects, yes, but I find it difficult to have much direct fun with this guy since he’s a rock.

Argus 3000 has a fantastic style, a creepy, disturbing appearance, and is truly a work of garage art that I’m happy to have in my collection. He’s not a toy, though, and the fact that so many people consider solid resin pieces to count as toys leaves me scratching my head. And even though I’ve been familiar with the bootleg toy scene (mostly through the Sucklord’s work that I’ve seen online), this is my first bootleg toy and . . . well, it’s a different kind of experience.

I like this. Not as a toy, but as an inspiration. I sometimes think it would be cool to create my own limited run toys, and getting a look at a bootleg resin piece convinces me that — if I had the time — I could design and manufacture my own resin toys. That alone, for me, makes the Argus 3000 a great buy.

If you’ve never taken a close look at bootleg resin toys before, you may want to watch the Secret Cinnamon Squad website on May 1 for their next release. Chances are the next one will sell out even faster than this first one did.

Good luck, Secret Cinnamon Squad. I hope this is the beginning of an army of unusual, weird toys.

Philip Reed wonders if he would have any luck selling a dozen or so pieces of a resin toy of his own design. Maybe there would be buyers, if he ever found the time to create a toy.