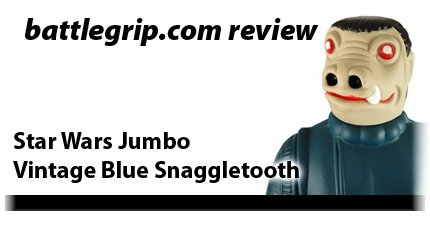 This is my first toy in the Gentle Giant (website, Twitter) Star Wars Jumbo Vintage collection of action figures . . . and it certainly won’t be the last. I’ve seen reviews and comments online stating that the toys aren’t worth the price, but now that I own and have opened one I feel that Gentle Giant has done something very cool by bringing the old Kenner Star Wars action figures back in this expanded size. I will be buying more.

As you look at the photos of the clamshell packaging I’d like you to keep one thing in mind: the Blue Snaggletooth action figure is roughly 12-inches tall. Yep, that is one giant clamshell. And it nails the late seventies Star Wars action figure packaging design with all of the right details. And I love how Gentle Giant’s designers used the space on the back to tell the story of Blue Snaggletooth and how the toy was basically invented by Kenner’s designers. Great package, and the clamshell is completely resealable so you can open your toy and then pop it back inside.

The gimmick behind the entire Star Wars Jumbo Vintage collection is that Gentle Giant has scanned in classic Kenner Star Wars action figures and then upsized them, basically bringing to life the Star Wars action figures of three decades ago in a much larger size. And Blue Snaggletooth here is an excellent representation of the line, with details right down to the lettering on the back of the leg showing up. And even though the toys were originally designed for the 3.75-inch size I think it holds up well as an oversized art object. There are better action figures made today, yes, but this is one of the best pop culture art pieces you’ll find if you grew up with Star Wars in the seventies and eighties.

Don’t expect much. As an upscaled toy, Blue Snaggletooth has the exact same articulation as the original: swivel shoulders and neck and greatly-obstructed swivel hips. Basic five-point articulation like we had when we were kids . . . and we loved it! The arm and head joints work perfectly, but like before those legs aren’t all that hot. Do you remember how not every action figure could sit? Well, Blue Snaggletooth has the same problem with his legs not quite swinging out perfectly. But since I plan to stand this guy next to the Blue Snaggletooth statue (review here) the legs aren’t bothering me any.

The sculpt is what it is: a re-sized classic action figure. But Gentle Giant’s contribution to the project was to translate that old toy into this new art object and I feel they did an excellent job. The toy looks exactly as it should, and the plastic — while hollow — feels durable and isn’t just something cheap slapped together to capitalize on nerds like me without putting any value into the piece. In my opinion Gentle Giant did an amazing job with this; as I said, this won’t be my last Star Wars Jumbo Vintage action figure.

As a manufacturer of incredible statues I had high hopes for Gentle Giant’s paintwork on the Blue Snaggletooth action figure, and other than some rough spots where the silver boots meet the blue suit the company didn’t let me down. And, fortunately, the worst of the silver paint is on the back of the legs so it isn’t even noticeable when the toy is on display. From the front the toy looks perfect; the face is especially well painted as is the silver belt buckle. Great work!

Winnah! This may not be the greatest modern action figure of 2012, but as a piece of the past brought into the future I couldn’t have asked for a cooler concept. There’s just something kinda weird and exciting about holding an ancient Star Wars action figure that has been upscaled to this size and everything about the finished toy makes me happy that I bought one. I’ll admit that the toy doesn’t look as dynamic or exciting as the newer Sideshow Collectibles 12-inch scale Star Wars action figures . . . but you don’t buy a Star Wars Jumbo Vintage action figure because you’re looking for a modern toy. No, you buy one of these because you were a Star Wars nerd when the original trilogy was unfolding.

There’s no way that everyone will feel the same way as I do about this toy, but if you were five years old in 1977 when Star Wars was released then I think there’s a good chance that you’ll be just as happy with this as I am. If you can at all hold and play with one before buying I suggest it; this really is more of an art object than a modern toy and nothing can beat actually holding one of these in your hands. Just don’t pick it up if you’re worried that you’ll want to collect the entire line.

Philip Reed should really go back and get the Stormtrooper in this line before it becomes an expensive piece.