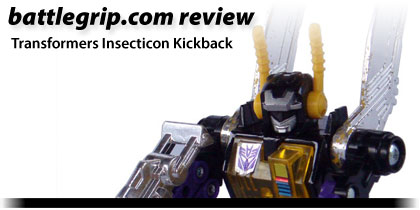 “With a greasy charm that’s almost supernatural, Kickback convinces others — humans, Autobots, and even fellow Decepticons — that he’s their closest friend. He then uses his personal influence to get them to perform increasingly difficult “favors” for him in exchange for his continued friendship and silence regarding their dirty secrets.”
— from More Than Meets the Eye Volume 1, The Transformers Official Guidebook

One of the three basic Insecticons — the Deluxe Insecticons, according to Mark Bellomo’s Transformers Identification and Price Guide, were not featured in the cartoon due to behind-the-scenes politics between competing Japanese toy companies — Kickback was also the first Insection I ever owned back in the dark ages known as 1985. I remember the day that I got him; we were out shopping and I spent my allowance on Kickback when we were at Menards — the same place I would eventually get Shockwave — and then I spent the ride home stickering Kickback. Kickback was one of the first Transformers that I owned, probably number four or number five in my collection.

To be honest, Kickback isn’t exactly all that impressive as a mechanical grasshopper. The head isn’t hidden well, the front legs shift around a little too much (though you can fix some of that with a screwdriver by tightening the arm joints), and overall he just looks a little strange. For play purposes he’s fine in this mode, but when displaying Kickback you definitely want him in . . .

Much better and a lot more like the character’s artwork. In robot mode Kickback’s arms move up and down, his head turns side to side, and his legs move at the hips (though not enough to place him in a sitting position). Kickback’s gun — described as an “electrothermic blast tube” in Mark Bellomo’s Transformers Identification and Price Guide — can be held on either hand. Kickback may be short — a little over four inches to the tops of his antenna — but he’s solid and looks pretty good.

It’s possible that it was said best at Addicted to Plastic:

“Insecticons really are (for me, at least) the epitome of what it is to be a Decepticon. Slightly off balance, mentally unstable, purple, wicked and nasty enough to be dangerous but too consumed by their own fear/anger/hate/greed/paranoia to ever triumph over good . . . “

I can get behind this statement. The Insecticons, maybe even more than the Constructicons, really drove home the idea of “special teams” during those first few years of the Transformers’ existence. And Kickback, at over twenty years of age — while he isn’t exactly a spectacular toy — is everything those first few Transformers releases are known for today: he’s durable, inventive, and, for me, packed with enjoyable memories.

Kickback isn’t exactly one of those awesome toys that must be owned, but if you can find him complete and in good shape he’s easily worth $10 or so. Especially if, like me, you remember him from your childhood. If you’re just looking for a cool version of Kickback for display purposes, though, the Kickback statue from Hard Hero is the way to go.

Search for Transformers toys at Amazon.com!

Philip Reed remembers opening Kickback’s chest and trying to figure out just what was supposed to be carried there; the gun certainly wouldn’t fit. It wasn’t until many years later that he learned about the toy’s past.