Search for Transformers toys at Past Generation Toys! 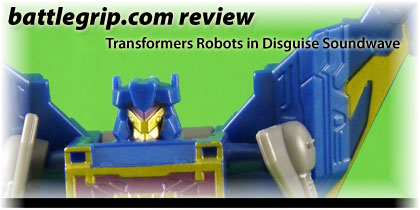 This tiny spaceship toy — less than 3-inches long with a wingspan under 3-inches — is clearly meant to be inspired by the F-117. A deformed flying wing that’s way to thick, Soundwave’s spaceship mode is ugly and the transformation process is clunky and unappealing. And when you flip Soundwave over and look at the underside you can see his face; a disgusting problem with some Transformers and a problem I thought Hasbro had solved years ago.

I know this was intended as a low price item, but that doesn’t excuse the clunky and hideous design. This toy was going to have to be awesome to get me to accept it — remember, Soundwave has to be a tape deck to keep me happy — and what we have here is a terrible chunk of plastic that’s inexcusable in today’s market. Hasbro can make better Transformers action figures at this size — the G1 Series Bumblee (reviewed here) proves that small Transformers toys don’t have to suck.

And this spaceship completely sucks and blows.

A little better than spaceship mode, Soundwave’s robot mode at least tries to mimic his classic design. The gold chest plate echoes the old cassette player chest design, even going so far as to include a few etched details that look like the buttons. The head’s not an exact match for the original but it’s similar. Unfortunately, all of these minor attempts at making this Soundwave look similar to the original is wasted because of the toy’s cheap construction; his arms keep falling off!

And the problems go deeper than parts falling off. Articulation is practically nonexistent — the arms are on balls and the legs swivel/hinge where necessary for him to transform — and the paint’s a little sloppy in places. Just because a toy’s inexpensive doesn’t mean that it has to be cheap. Well, this one’s both inexpensive and cheap. Plastic junk is probably an accurate description.

An ugly spaceship mode, lousy construction, and the simple fact that Soundwave should be a cassette player all add up to make this one of the worst Transformers toys I’ve seen in the last few years. This is the only toy in this subline that I own, and after how bad this one turned out I’m going to ignore the other pieces in this series.

Philip Reed has to go play with his Encore Edition Soundwave now, just so that he can wipe the filth of this terrible piece out of his memory. The toy may have been priced at around $3 when he grabbed it, but Philip wishes he had the $3 back.