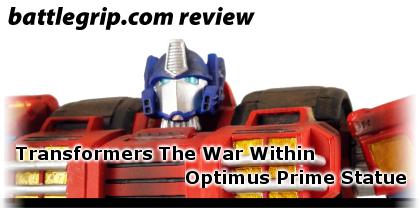 Released in 2005, this hefty War Within Optimus Prime Statue* is straight out of the fantastic Transformers War Within comic books. I’ve got the single issues of the first storyline, a trade collection of the second series*, and often flip through the Transformers: War Within Omnibus* (which IDW really needs to reprint) and consider this to be one of the best Transformers comics ever produced. And fortunately this statue takes the comic Optimus Prime and gives us a great collectible that shows just how much I missed by not buying Transformers statues when Palisades was in business.

A large, well-designed box guards Optimus Prime when he’s traveling through the postal service and while the photography is a little dark on the box it’s actually a quite attractive design. The front and sides show the statue while the back gives us a shot of the War Within cover artwork, a block of text presenting Optimus Prime, and peeks at Devastator (want!) and Shockwave (already ordered!) statues. Nice work, and it’s nice that Palisades credited the graphic artist — Greg Leeuwen — for the work on the box. I wish more toy/statue manufacturers would credit their staff and freelancers.

Packaging? Who Cares About Packaging?

I know, I know, all you wanna see is the Optimus Prime statue. Well, I hope I’ve taken enough photos of this statue but if after you read this review you find yourself searching the web for one of your own don’t blame me. Yep, this is a great Optimus Prime collectible and it’s great that this Cybertronian version of the character is so drastically different from the Cybertronian Optimus Prime* that was released earlier this year. Just how many different Cybertronian modes have we seen for Optimus Prime so far? There’s gotta be a website out there that shows all of Prime’s alt forms, right?

Over 7-Inches of Prime Art

Including the base, this Optimus Prime statue is just over 7-inches tall. And it’s a bulky, massive work of art that’s about 6-inches wide and roughly 6-inches deep (from Prime’s back to the tip of his rifle). It’s unlikely someone will miss this Optimus Prime statue in a collection; and that’s a great thing since the statue’s sculpt is phenomenal. I just wish the box credited more than “3-L Creation Group Ltd” for the design. There’s a website online for 3-L but it’s full of so many broken links I’ll skip linking to them; anyone who really cares to know more about the sculpting team/group is no doubt smart enough to figure out how to search the web for more info.

But the Sculpt, Man!

Seriously, this is some nice work. Pistons, massive tires, the Generation One-inspired head, pipes on the arms . . . every detail is tight and looks great. My statue suffered some damage before it reached me — one of the antenna has been bent a little — but I have no complaints with the actual sculpt. This is my first Palisades Transformers statue and if they’re all this tight then I really hurt myself by not snagging these as they were coming out years ago. Why didn’t you guys smack me around back in 2005 and force me to buy these statues when they were new? All of the photos here should give you an idea of how cool Prime looks, but if you only enlarge one shot click on the photo above and look at Prime’s abs. Very nice work.

A Paint Job That Is Almost Good Enough

So the sculpt is awesome, but the paint work is merely incredible. Palisades’ painters — credited to Eddie and Jason Wires — did an admirable job with the paint, and I appreciate the weathering, but I have to admit that the paint isn’t as good as the statue’s sculpt. The headlights are really rough — I keep thinking the gold lights are stickers — and all over the statue’s lighter colors I can make out a few too many brush strokes. (The worst brush stroke offenders have to be the gold paint and the windscreen on Prime’s back.) And the weathering effects feel like they were started but not completed; the statue needed more drybrushing to really bring out the beaten look that’s hinted at.

But these complaints are only obvious when you get the statue up in your face and start staring at the details. From a reasonable viewing distance if the statue’s displayed there’s absolutely nothing wrong with the paint quality. And it’s possible I’m being overly harsh, but if I am it’s only because I’m a little disappointed that the paint isn’t as good as the sculpt. Did I mention that this is an amazing work of sculpted art?

If I could only use one word to describe the War Within Optimus Prime Statue* I would have to choose “Mind-blowing.” Okay, that’s two words but I feel justified because this is an Optimus Prime statue that I still can’t believe was ever produced. Over 7-inches, lovingly designed, and cleanly cast and masterfully packaged this statue surprises me because it takes a design from a comic book and puts it out there for the hardcore fans.

This War Within statue makes me regret that I missed the War Within Titanium toys — man, I should have those “Seekers” in my collection — and really drives home just how much I missed before getting back into collecting toys. I’m glad I managed to grab this statue online at a low price, but just as with the Transformers busts I’ve been reviewing over the past few months this statue just makes me want more in the series.

And that’s a dangerous thing. Someone stop me.