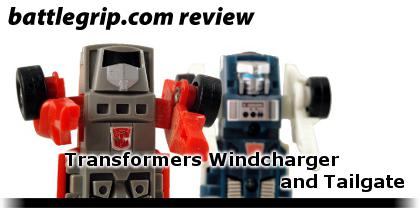 And here he is, Windcharger, the very first Transformers toy I ever owned as a kid. This isn’t the exact same toy I had as a kid — this one is actually in much better shape — but having Windcharger again is fantastic since the toy was the beginning of a long enjoyment of Transformers and thinking of the toy over three years ago (see this old Livejournal post) is part of what led to the creation of battlegrip.com.

Windcharger, the red Transformers toy shown here, was released in 1984 as one of the original Autobot mini-cars. These were the least expensive of the toys at the time — $3/each — and it was that price that made Windcharger my first Transformers toy. The white car is Tailgate, a retooled version of the mold that was released in 1986; take a close look and you can see that the faces on the two toys are drastically different.

Both toys get most of their color from the plastic, but a few painted details help bring out the robot mode. The faces are painted, as are the rear windows of the car modes, but it looks like the side windows and windshields are actually another plastic piece. That’s not something we would see these days — the main body would be one piece of plastic with painted details — but it adds a little extra depth to the cars. Basically, the paint’s acceptable and neat but not especially detailed or complicated.

Close to thirty years since I first played with Windcharger it feels good to have the toy in my hands again. The transformation process is very simple, the robot mode simplistic, but everything about the toy brings back great memories of when I was first introduced to the Transformers series. Hours, days, and weeks of sketching and designing my own Transformers designs, playing with friends, and generally having a lot of fun are all trapped in this one plastic toy and I’m very happy that I spent the $10 to buy him.

And playing with Windcharger is working on my mind, because it has me not only wanting to buy more Generation One toys but also thinking I should spend time drawing some of the old Transformers toys. If that’s not the sign of a fun toy then I don’t know what is.

Philip Reed knows that it’s nostalgia talking when he plays with Windcharger, but he doesn’t care.