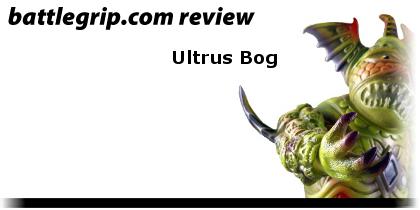 At San Diego Comic Con I just happened to walk by and spot this new Ultrus Bog by Skinner (website, Twitter) on sale at a booth. Which booth? I have no idea at all; I was rushing to a meeting and it was entirely an accident that I even came across this toy. But within a moment of spotting it I was cramming the toy in my bag and heading to the meeting $85 poorer than I had been. And since this toy is being released today I thought it appropriate that I make this review my first priority this morning.

The Ultrus Bog is massive, a lot bigger than I had expected it to be when I first started hearing about the toy. It’s not the largest kaiju toy in my collection — that honor belongs to the Shikaruna Dorol (review here) — but it’s pretty damn big and towers over some of the smaller vinyl toys in my collection. I’ve definitely gotten less plastic for $85 before, so when it comes to price the Ultrus Bog is a good buy if you’re already a collector of vinyl and kaiju toys.

If you’re at all familiar with Skinner’s work (gallery at his website) then you can tell by looking that he was involved in this toy’s design. Bat wings, a nasty face, a body made of skulls, and fantasy-style armor all come together in a way that only Skinner could imagine. This monster’s a great example of his design style and it’s very cool to own one of Skinner’s creations as a vinyl toy.

Kaiju toys just aren’t known for their articulation, and Skinner’s Ultrus Bog keeps to that tradition with only six moving parts: head, shoulders, wrists, and waist are all the standard twist points where the different pieces of plastic come together with one popping into another. The wrists were a surprise, but I guess the shapes of the arms and hands prevented the hands from being cast as part of the arms. Whatever the reason, it’s cool that the Ultrus Bog can swivel his wrists around because now I can pose that monster in that classic Frankenstein pose with outstretched arms.

I hadn’t realized that the plastic under that paint was glow-in-the-dark vinyl, but as you can see in the picture below the Ultrus Bog glows. And it’s a bright glow, which means that this beast will keep on shining long after cheaper glow plastics have lost their power. And the paint work over the plastic is so smooth that not once did I guess that the toy was a glow-in-the-dark piece. Sprays of greens, reds, purples, and whites overlay the plastic body and it looks like maybe a dark wipe was applied after the sprays.

The Ultrus Bog is a great kaiju toy, but for a few moments after opening the bag I was worried that the toy had a fatal flaw; it would not stand on its own! But playing with the legs and stretching them apart I soon determined that if the stance was a little wider the toy would stand just fine. So grabbing a hair dryer I heated the plastic and then held the toy’s legs in position for about five minutes while the plastic cooled. Problem solved, and now the Ultrus Bog stands just fine on his own. Whew. Had me scared there for a little while.

A fun, twisted monster that’s going to look fantastic on the shelf with my other kaiju toys, Skinner’s Ultrus Bog is one of those toys that looks like it jumped right out of a classic Dungeons & Dragons game and is ready to tear your head off and eat it. I’m not sure how many colorways are planned for the design, but if you like the monster then keep your eyes on Lulubell Toys today because this San Diego Comic Con edition goes up for sale later today.

Congrats, Skinner, on a cool toy! And sorry I never did make it by your booth, but thank you very much for stopping by and finding me so that we can meet.

Philip Reed now wants to see another Skinner toy hit the shelves. If he gets a vote then Philip votes for this Lord’s design on Skinner’s site. That would be awesome!