Cynthia Celeste Miller, author of the Cartoon Action Hour RPG, takes a look back at a favorite toy line/cartoon of the eighties.

In the earliest days of the 1980s, I was very, very young. I was still a very linear thinker. Sword-and-sorcery was sword-and-sorcery and science fiction was science fiction. There was no crossover between the two genres for me. Perhaps this is why I fell so deeply in love with He-Man and the Masters of the Universe when I first spotted the action figures in a Christmas catalogue. The fact that these guys had swords and lasers just blew my mind. It completely changed how my creative mind functioned, tearing down the artificial barriers that I had apparently been born with.

It should come as no surprise that my Christmas wish list consisted of hulking brutes with names like Beast Man, Man-at-Arms and Skeletor. My mother was a little concerned. Whatever the case was, my parents purchased the entire original wave of MotU figures for me that year. Castle Grayskull, however, was obtained a few days later with money I had earned from selling pecans and other such odd jobs. 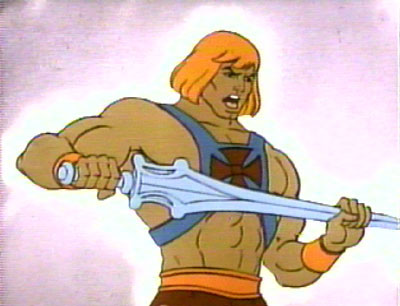 To say that I was enamored with these action figures would be a huge understatement. It bordered on obsession. I played with them practically all the time, creating my own science-fantasy stories that only I was privy to. I was the director and they were my actors, or at least that’s how I saw it at the time. Heck, I even went to great lengths to find new and interesting locales in which to carry out my action-packed dramas. I recall that my favorite “stage” was this little brook that ran through my aunt and uncle’s yard. It was perfect, due to the “rocky cliffs” and “rushing rapids” that opened up so many storytelling possibilities. Another favorite site was this odd pit in my backyard. It wasn’t more than three feet deep and four feet wide, but for whatever reason, I spent many hours there, directing my little actors through scene after scene.

All my other toys were shoved back into the toy box (at least for a while), allowing my MotU action figures to have my undivided attention. Star Wars and Strawberry Shortcake simply couldn’t compete with the muscle-bound warriors of Eternia. No way, no how!

Now that I think about it, I was in love not just with the MotU figures, but also with the incredible mini-comics that came packaged with them. Well, they were more like storybooks than proper comicbooks, but I adored them nonetheless. My adventure-crazed eyes poured over them time and time again. The art was evocative and the stories were exciting. I even started making my own playsets based on the locations found in those pages, the most notable being Man-At-Arms’ stone cabin.

The mini-comics, to me, offered the definitive MotU. They were like extremely thin bibles for my vision of He-Man holiness. Imagine my surprise when the cartoon series first hit the small screen. Who the hell is Prince fricking Adam? And why can He-Man suddenly lift mountains? I was outraged! Outraged, I tell you! To my wee little mind, this was sacrilege. The He-Man of the mini-comics was simply an ultimately skilled fighter, not a superhero. And he was not a prince in disguise… that much was certain. I still remember with perfect clarity how angry and disappointed I was. They took everything I had come to know about MotU and threw it out the window, replacing it with a vastly inferior mythos.

Eventually, I warmed up to the cartoon, but I never liked it as much as I liked the mini-comics. This is still the case, more than 25 years later. I’m not going to lie: I love the cartoon now, but I still have problems with He-man himself, or at least that version of him. For one thing, he’s so much more powerful than the other Masters that it’s almost pointless to have them around at all. For another thing, how on earth (errr, Eternia) could no one figure out that Prince Adam and He-Man are one and the same? Is it because Adam wore lavender? Come on! They both even have a giant green cat with yellow stripes! How dense can these people be?

Yikes, I guess I still get fired up over this matter.

My love of He-Man and the Masters of the Universe and other cartoons/toy lines of the 1980s is what prompted me to design and release Cartoon Action Hour in 2002. CAH is a pen-and-paper roleplaying game that emulates the retro-toons of that era. It was nominated for “Best RPG” at the 2004 Origins Awards and has accumulated quite a strong following. I recently released a second edition of the game (dubbed “Season 2”) that continues to sell strongly. You can find more information about it at www.spectrum-games.com.

Even at 35 years of age, I remain a staunch fan of He-Man and the Masters of the Universe in whatever form it takes. I even kind of like the 1987 live-action film, despite its many abysmal qualities. To some people, a toy line is simply a toy line; nothing more. MotU was far more than that to me. It was my springboard to adventure, my gateway to creative thought, and my stepping-stone to a fantastic world filled with magic, high technology and simplistic (but fun) morality plays.