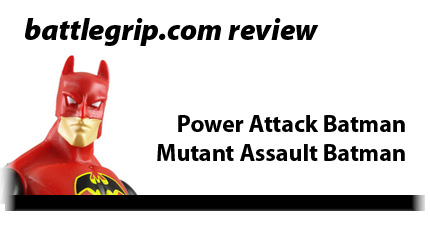 As you can see, it’s time for more of the Power Attack Batman series (Amazon.com search*, at Entertainment Earth*), and this time we’re jumping into the new wave with a toy I was warned about. Mutant Assault Batman is an odd figure in the series, but even for it’s weirdness it’s still a fun concept.

Above you can see the packaging design as well as the single-panel comic on the card back that tells us the story of Mutant Assault Batman. I’s awesome that Mattel decided to go with a design that gives us such great art and I’m really looking forward to seeing how they maintain this level of quality across the line. In the art we can see that Killer Croc mutated Batman to bring us this bizarre Manbat-like design. It’s a totally stupid and fun illustration and I’d love to see the line grow to include mini-comics in this art style.

Above and below are shots of Mutant Assault Batman with the bat accessories snapped on over the body. The head is two halves that snap together and turn Batman into a strange creature. The milky white coloring was an odd choice, but the sculpting and paint of the accessories is excellent and the pieces fit tight and don’t feel like they’re going to fall off.

Those arm pieces are a bit too long — I’d be happy if they were half the length they are — and the weight knocks Batman’s balance off and makes it tough to stand him up without screwing around with the toy for a few moments to get the arms positioned perfectly. It’s kinda sad to admit, but these bat accessories are less fun than I was expecting and I’m going to be displaying Mutant Assault Batman without the accessories. That’s not at all what I expected before opening the package; the pieces are okay, but the balance issue just outweighs the fun look of the design.

Beneath those bat accessories, Mutant Assault Batman uses the same basic body as the Battle Gauntlet Batman action figure (review here) . . . except that the toy is colored red and black instead of gray and black. And I am loving the red and black costume without accessories way more than I expected to.

Batman’s red and black costume isn’t simply the Battle Gauntlet Batman (review here) with colors swapped, but instead Mattel put some effort into the color design and gave us a Batman with color details unique to this figure. The photo below shows three variants on the same basic body, and notice that the Mutant Assault Batman’s shoulders and thighs have a different approach to the costume design. It’s all just paint apps, but it really helps make this toy standout (even without the bat accessories in place).

Have I mentioned that I’m loving the Power Attack Batman series (Amazon.com search*, at Entertainment Earth*)? Mattel really has done a fantastic job designing a toy line that isn’t connected to any specific Batman story, and so far everything about the line feels like it was done for play first and collecting second. I’ll admit this Mutant Assault Batman isn’t as cool as I was expecting — to be honest, the accessories are a little bit of a letdown — but the base body alone and new colors work well to give me a unique Batman in the growing Power Attack Batman display.

The Mutant Assault Batman action figure shouldn’t be at the top of anyone’s “buy” list when it comes to the Power Attack Batman series (Amazon.com search*, at Entertainment Earth*), but if you’re loving the colors and look of the toy in the pics then it’s worth grabbing. It’s every bit as durable and nice as the other figures that use the same sculpt, just don’t expect too much from the accessories.

Philip Reed should have listened to everyone who suggested opening Mr. Freeze first.