Even though they’ve dropped the “Power Attack” part of the name, Mattel’s newest series of Batman action figures will always feel to me like they’re part of last year’s Power Attack Batman series (Amazon.com search*, at Entertainment Earth*). And as soon as I saw this Robin at Walmart I just had to have him; it’s too bad the figure has a few flaws and isn’t as incredible as the Batman figures I’ve already reviewed. 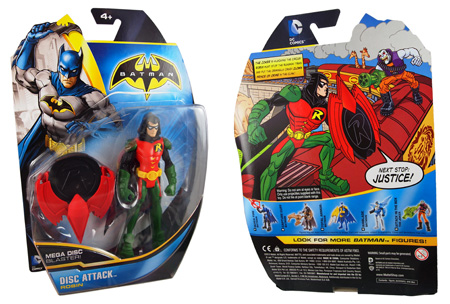 Fantastic, and no complaints from me at all when it comes to Disc Attack Robin’s sculpt and design. I don’t think the figure shares any parts with other action figures in the line, but not owning them all I cannot guarantee that. The slender design goes quite well with the character and that hooded cowl is a great touch. The only design choice I do not agree with is the vinyl cape; Mattel, why you no give Robin cloth cape like Batman get? And hey, when did ME TALK LIKE GRIMLOCK HAPPEN? 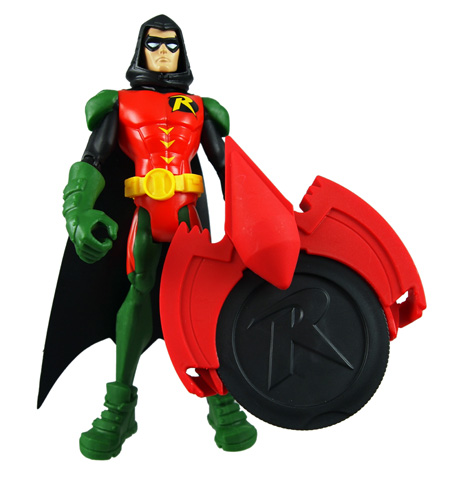 Nice and tight, with very few sloppy spots. The “R” tampo on the chest looks perfect, and all of the colors are perfect for the character design. If the colors here look a bit richer and more vibrant than you’re used to seeing in my reviews it’s because I’m experimenting with a new camera; I’m not completely happy with the results, but I figure it’s best to experiment now before I dive into my next toy book project. 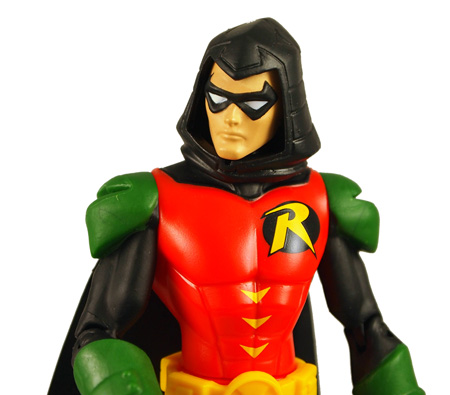 The same basics that we’ve seen in the other Power Attack Batman series action figures (Amazon.com search*, at Entertainment Earth*). My only complaint is that the elbow hinges swing the arms in toward the body, making it impossible for Robin to aim his disc-launching shield straight ahead. And about that shield . . . 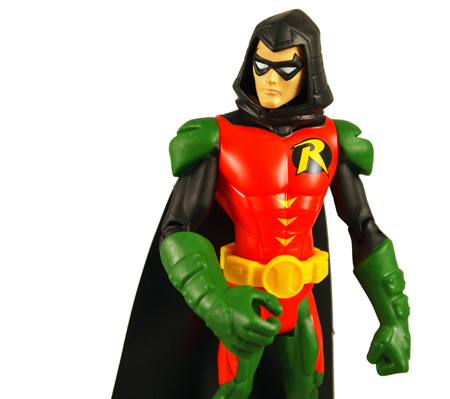 The shield is massive, which I’ve come to expect from the accessories in this series, but the shield also doesn’t clip on that well or even work . . . and I did not expect the shield to be a total failure and waste of plastic. Other Power Attack Batman action figure (Amazon.com search*, at Entertainment Earth*) accessories haven’t always been amazing works, but this is the first time I can think of when an accessory in the line turned out to be pure junk. I’ve hidden the shield behind the figures in the display and am disappointed that I can’t get the disc to fire more than an inch or two. Very lame. 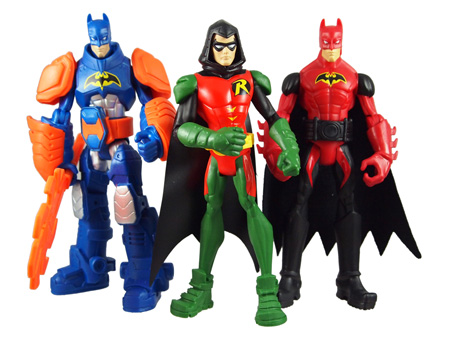 I’m going to identify Disc Attack Robin as the weakest Power Attack Batman series figure (Amazon.com search*, at Entertainment Earth*) I’ve bought. A great sculpt, but the angle of the elbow hinge dings a point or two of the figure and that accessory just destroys any play value kids could have gotten from the shield.

But Disc Attack Robin does look neat in the display with the Batman figures from the line, so as a collectible it’s kinda neat. I just feel that it’s not the best toy in the line . . . and since these should be toys first I’m calling this one a failed release. That’s kinda sad.